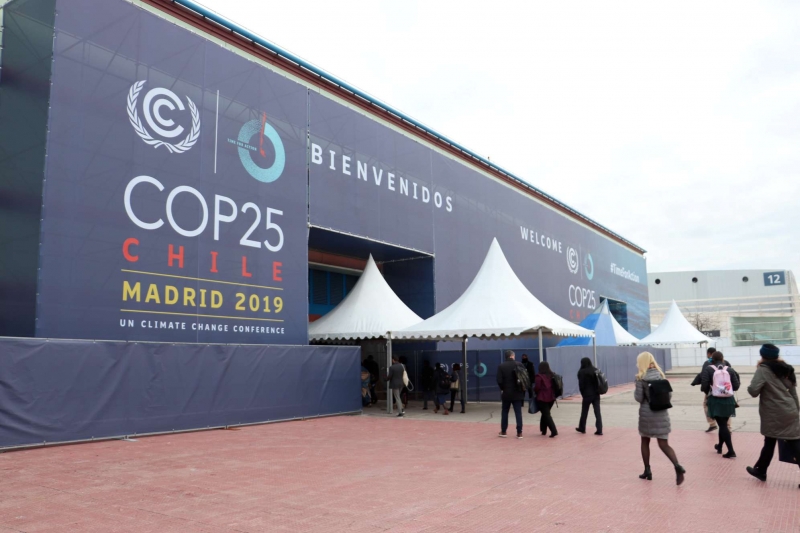 MADRID, Spain (PAMACC News) - As the 25th Conference of the Parties (COP25) of the United Nations Framework Convention on Climate Change (UNFCCC) enters its fifth day, representatives from a global coalition delivered a resounding call to governments to hold polluting industries liable and make them pay for the damage they’ve knowingly caused and for real climate solutions.

The call comes just two months after the coalition was launched at the UN Secretary General’s Climate Summit in New York City. Participating organizations and signatories hail from more than 63 countries including Bolivia, The Philippines, and Nigeria.

Fossil fuel industry liability is a growing area of focus for climate experts, academics and governments alike as the industry’s long history of denial and the link between industry emissions and climate impacts becomes more evidenced. From U.S. states to Vanuatu to Peru, elected officials and people are exploring holding the fossil fuel industry liable for its long history of deceit and environmental destruction.

Earlier this year, the European Parliament held a hearing investigating Exxon’s attempts to mislead the public. The Philippines’ commission on human rights is considering the fossil fuel industry’s responsibility for human rights violations in connection to climate change. And in Peru, a farmer is suing a German utility for its role in the crisis harming his livelihood.

In the United States, the climate plans of numerous presidential candidates include taking steps to hold the industry liable. And industry attempts to preempt accountability at the city and national level have consistent failed to gain support. A landmark case against Exxon Mobil in New York State is expected to be decided in the next few weeks.
Quotes

“People and governments are already taking steps to hold Big Polluters like the fossil fuel industry liable around the world. The next step is for decisionmakers, including those at the UNFCCC, to get on board and hold polluting industries liable for the damage they've knowingly caused, and use the finance to fund the real solutions the world needs,”,” said Sriram Madhusoodanan of Corporate Accountability, “Big Polluters are most responsible for this crisis and must be made to pay for the damages, loss of life, and climate doubt their operations have knowingly created.”

“The world’s climate culprits are increasingly being brought to court, signaling the beginning of a global boom in climate justice,” said Jean Su, energy director with the Center for Biological Diversity. “The evidence can’t be any clearer that big polluters have known their dirty fossil fuels are cooking the planet. We’re urging all world leaders to hold these corporations accountable once and for all.”

“This year’s climate talks are a crucial opportunity to hold polluting industries accountable for the climate crisis, especially the 100 fossil fuel companies that are responsible for 71% of greenhouse gas emissions since 1988. Citizens around the world are rising up to demand climate action, to demand an end to the immense suffering global temperatures are already causing in the Global South. The dirty fossil fuel party is over,” said Harjeet Singh, Global Lead on Climate Change for ActionAid International.

“The fossil fuel industry must take full responsibility for the climate change crisis. There is no alternative to cutting down emission at source and the time is now,” said Philip Jakpor of Environmental Rights Action.

"At every COP, we address governments as it is they who possess the political power to act on and address the climate emergency. But an important matter we are demanding them to do is to regulate the policies, behavior and operations of corporations.

One of the urgent things that corporations must do is to pay reparations for the huge damage they have caused for so many decades. But not pay so they will be able to continue business as usual and pollute even more. We have to make them pay for the many years of abuse, for the many decades of exploitation of resources for their operations, and for the enormous costs of suffering that we from the South have historically endured," said Lidy Nacpil, coordinator of the Asian Peoples Movement on Debt and Development.

“Indigenous Peoples as all of humanity suffer massive and gross violations of their rights by the continuation of fossil fuel emissions. Those directly responsible must exercise some morality and look to their future generations as well as ours,and the continuation of life on Mother Earth as we know it and take immediate steps to stop their emissions at source,” said Alberto Saldamando of Indigenous Environmental Network.

"Some of the biggest and dirtiest corporations on the planet are a huge contributor to the climate crisis. We will stand up to those who are
destroying the planet and harming communities with impunity. We will push for a transformation of our energy, transport, food and economic systems,” said Dipti Bhatnagar, Climate Justice and Energy program coordinator at Friends of the Earth International.

“We are in the midst of a global crime scene where millions are being assaulted by unprecedented levels of climate violence. But those destroying the lives and livelihoods of innocent people are not nameless or faceless thugs. The names of these climate criminals are well known - they are big polluting industries whose thirst for profit is destroying people & planet. They must be brought to justice and held liable for the crisis they have caused.” Asad Rehman, Executive Director, War on Want

“For decades, Big Polluters have gone to any lengths to block, weaken and delay policy. That time is over. They need to pay for the real solutions and be held liable for their years of abuse.” -Pascoe Sabido, Corporate Europe Observatory.