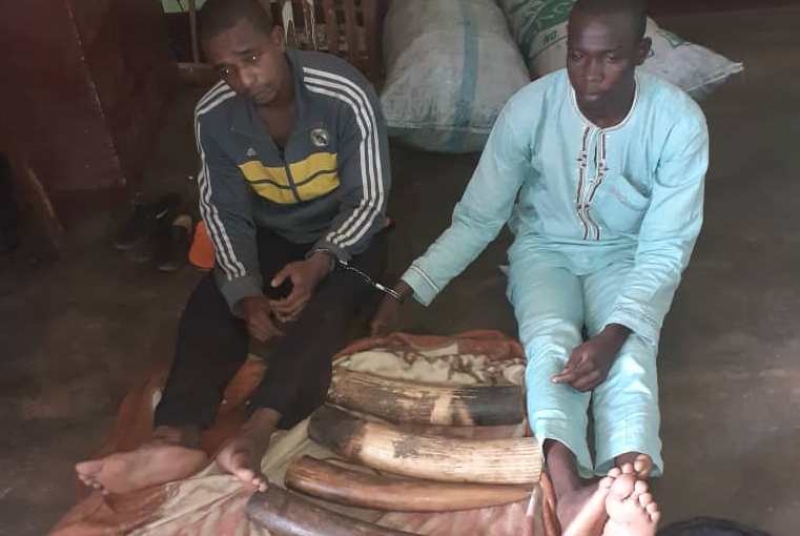 BATOURI, Cameroon (PAMACC News) - Wildlife officials in Batouri-Cameroon on Wednesday November 13, 2019 arrested two people for elephant ivory trafficking. The two were found in illegal possession of two ivory tusks. The arrest was carried out during a crackdown operation led by the Kadey Divisional Delegation for Forestry and Wildlife in collaboration with the gendarmerie. A non-governmental organization called LAGA assisted wildlife officials in the operation.

The two suspects aged 30 and 29 were attempting to sell the ivory tusks in Batouri after travelling from Kenzou in the East Region with the tusks wrapped in a blanket and hidden inside a travelling bag. When they arrived the town a day before their arrest, they took up lodging at a hotel and were just about succeeding in selling the tusks when wildlife officials stepped in the hotel room to find them red handed. They violently resisted arrest as the team made swift moves to subdue and handcuffed the fighting pair. The bag of ivory was found hidden under the hotel bed.

Sources close to the investigations that spoke on condition of anonymity say they are part of an even bigger network based in Kenzou which is close to the border with the Central African Republic and equally located along the Bertoua to Yokadouma road. Ivory trafficking networks have developed an illegal flourishing business there. The networks control ivory trafficking from the Central African Republic and the small town serves as a collection point for ivory coming in from the neighbouring country. Ivory and pangolin scales that arrives the country are stocked there before being moved to bigger towns such as Bertoua, Yaounde and Douala.

The same sources say the one of the traffickers had been twice with ivory tusks and released without any charges made. He arrested in March 2019 in Yokadouma by the gendarmerie with over 250kg of ivory seized. He was released and no charges filed against him and wildlife officials who have competence over the management of such cases where never involved in the matter bringing to question what happened with the dozens of ivory tusks seized. He had equally been arrested with ivory tusks in Gamboula in the East Region and released with no chargers made. When traffickers are arrested and released, they simply step up the killing and trafficking in parts of protected species to make up for what they lost in terms of bribing and products seized.

Elephants are classified as protected species according to the wildlife law governing the sector and over the years dozens of traffickers have been arrested in the country with ivory. This has been achieving results with substantial fall in ivory prices witnessed all over the country and also leading to a drop in the black market demand for ivory. This equally indicates the importance of international commitment in stopping the trade as China which is the main destination for ivory products have recently been making efforts to clamp down on the trade, hampering the flow of ivory into the country.