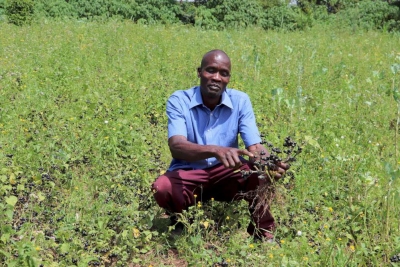 KAKAMEGA, Kenya (PAMACC News) - In the heart of Kakamega town, Eliakim Andaye arrives at Friends Hotel along Mumias Road with a bag full of assorted African leafy vegetables. He is fulfilling his contractual agreement to supply the vegetables on a daily basis, after which he will collect his cheque by the end of the month.

“I have been a maize farmer since I was a child, but I never knew that from African leafy vegetables I could earn so much money to buy all the maize and other food items my family needs, but above all, I have been able to pay university fees for my two children, and the last one has just finished his secondary education, preparing to join college any time soon,” said the farmer.

Andaye learned about indigenous vegetables from the AGRA led Sustainable Land and Forest Ecosystem Management (SLFM) project that was implemented in collaboration with the Kenya Agriculture and Livestock Research Organization (KALRO) among others.

The project, which was initiated by AGRA in collaboration with UNEP, GEF, KALRO and the County Governments, was aimed at enhancing productivity of smallholder farmers who live around Kakamega and Nandi Forests in order to reduce their encroachment on the forests as a way of conserving the forest biodiversity.

On his farm in Shamiloli Microcatchment area, in the outskirts of Kakamega town, Andaye has dedicated one full acre of land to growing of different types of indigenous vegetables not limited to Ethiopian kales (Kanzila), African nightshade (lisutsa/managu), spider plant (tsisaka/saga), Amaranthus (libokoi/terere), Pumpkin leaves (lisebebe), Cowpea (likhubi/kunde) among others.

The African leafy vegetables are arguably climate resilient because most of them are indigenous to places where they are being grown. But following the introduction of exotic commercial vegetables such as cabbage and kales, many farmers tended to abandon the indigenous vegetables.

However, patrons both in rural and urban areas who care about healthy diets are once again embracing the indigenous vegetables due to their nutritional and medicinal values, hence, high market demand.

“At the farm gate, I earn at least Sh1500 per week, but from the supply to hotels, I make at least Sh20,000 per month or more depending on activities at the hotels,” he said noting that whenever there are seminars in the hotels, he supplies more than normal daily quantities.

According to John Macharia, the Country Manager at AGRA, Kenyans must go back to their sustainable way of living. “We have to be environment friendly by diversifying our diets to include indigenous foods that relate well with the prevailing environmental conditions, and use methods that are friendly to nature,” he said.

Indeed, all farmers who are growing the African leafy vegetables in Western Kenya use compost and farm yard manure, which is different from farming of cabbage and kales that require synthetic fertilisers and frequent chemical spraying for pests and diseases.

In Chepketemon Village in Nandi County, Gideon Rono is another farmer who only knew cabbage as the only vegetables that could be produced from his farm apart from maize and Irish potatoes.

“In fact, when I was introduced to these indigenous vegetables, I took it as a big joke. But since many other farmers in my area were also doing it, I decided to play along,” he said.

“But today, I have become a champion. I have since increases my acreage from just a small piece to one full acre after I learned that the African leafy vegetables do not need so much input, and that the market was readily available,” he said.

According to Silas Too of the Ministry of Agriculture in Nandi County, most of the people in the area are dairy farmers, but they are slowly taking up vegetable farming to supplement their income.

According to H.E Dr Wilbur Ottichilo, the Governor for Vihiga County, it is a high time all smallholders in the county stopped planting of maize and beans to concentrate on African leafy vegetables.

“Vihiga is traditionally known for production of indigenous vegetables. The culture of growing the poor yielding maize and beans that are also vulnerable to the changing climatic conditions in this county must be reversed, and that is what we are trying to do,” said the Governor.

Nutritionists have pointed out that apart from being affordable; the African leafy vegetables are also rich in micronutrients, which are lacking in imported vegetables and simplified urban diets, and hence important for nutrition.

"Many farmers have ignored African indigenous leafy vegetables and yet they are very nutrient rich, and some of them have medicinal values," said Ruth Oniang'o, a Professor of nutrition and the founder of the Rural Outreach Africa (ROA), a local organization that champions for growing of such indigenous vegetables in schools.