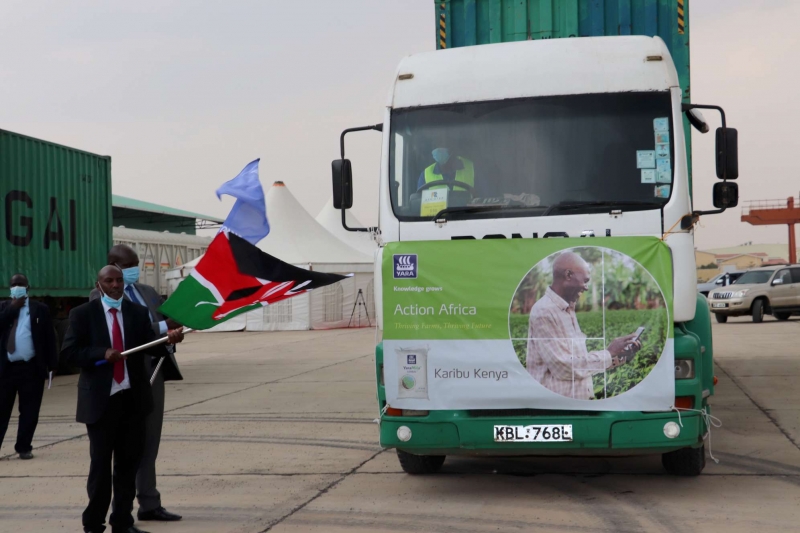 NAIROBI, Kenya (PAMACC News) - Hundreds of farmers in Tranzoia County have switched from common fertilisers that have for decades been promoted by the government to blended non-acidifying fertilisers, and as a result, the county government says that annual maize yield has increased by one million 90 kilogram bags per season, for the past three seasons.

According to Dr Stanley Kenei Tarus, the Deputy Governor for Tranzoia County, farmers were already counting losses due to the declining soil fertility across the county.

His sentiments were echoed by the Agriculture Cabinet Secretary Peter Munya, who said that in the past 12 years, the government has been supplying farmers with the same type of fertilizers, thereby helping farmers poison the soils.

So far, according to Munya, 19 million acres of land especially in Nyanza region, Western parts of the country and within the Rift Valley are already acidic.  “We must change the way we do things if we have to improve food productivity,” said the CS during the launch of an electronic voucher system which will be used to deliver subsidised farm inputs to smallholder farmers.

According to Tarus, the switch from straight fertilizers to blended ones was a long journey that involved scientific surveys.

“We first started with soil testing in 2013 to find out why yields were declining,” said Dr Tarus. “As a result, we found that apart from the changing climatic conditions, all our soils across the county were already acidic because farmers continually applied straight fertilisers just to provide two nutrients - nitrogen and phosphorous,” he said.

It was then that the county officials begun encouraging farmers to conduct soil testing, and use appropriate blended fertilisers which have more nutrients than the normal CAN, DAP and Urea. As a result, reports the Deputy Governor, yields across the county have improved by one million bags. “This good news to us because farmers now have more food and they can make more money from the same pieces of land,” he said.

Philemon Olembo a smallholder farmer from Mawe-tatu village in the heart of Tranzoia County is one of the farmers who have embraced the use of blended non-acidifying fertilisers.

“In the past two seasons that I have used blended fertilisers, yield from my two and a half acres of land has increased by eight bags,” said Olembo, noting that the increment is more than enough to sustain his family of three children for a whole year.

“I do not know much about fertiliser contents, but I learned about the non-acidifying fertilisers from a local radio program and I decided to try it out,” said Olembo.

A 2019 report by the Alliance for a Green Revolution in Africa (AGRA) show that cultivation with acidifying fertiliser applications (or without any inputs) leads to a decline of pH of one unit in 5 to 10 years.

Apart from soils becoming acidic due to constant use of some farm inputs, experts say that plants need more than 10 key nutrients for proper growth, and they will always extract such nutrients from the soil. These nutrients must therefore be replenished every time so as to sustain soil fertility.

According to William Ng’eno, the Country Manager of Yara East Africa, which manufactures some of the non-acidifying fertilisers, the blended products contain combinations of nitrogen, phosphorus, potassium and in most cases sulphur too – the most essential plant nutrients – designed to meet specific crop requirements to maximise crop yield and quality.

“Each prill or granule is a compound fertiliser and contains each nutrient in its formula,” said Ng’eno.

“We are working very closely with the private sector and non-governmental organisations as we try to introduce the balanced fertilisers to our farmers so as to show them what it looks like, where to get it and how to use it,” said Dr Tarus.

Kiambu is also one of the counties where farmers have started using the new fertiliser generation.

“The county government bought these fertilisers from four different companies, and we distributed them to smallholder farmers across the county for self testing,” said Dr James Nyoro, the Governor Kiambu County. “And now, given the evidence of improved yields, we are convinced that time has come for us to move from straight fertilisers to blended ones,” Governor Nyoro told the Seeds of Gold.

In collaboration with AGRA, the County Government of Kiambu is using a model known as Village Based Advisors (VBA) to create awareness on use of blended fertilisers and other important farm inputs among smallholder farmers.

“The solution to most of the ailing soils in the country is to apply fertiliser products that are better suited to the soil and crop type,” said John Macharia of AGRA. “Balanced and blended fertilisers are the best option, and farmers can also include secondary and micronutrients that are in deficit in many soils,” he told the Seeds of Gold.