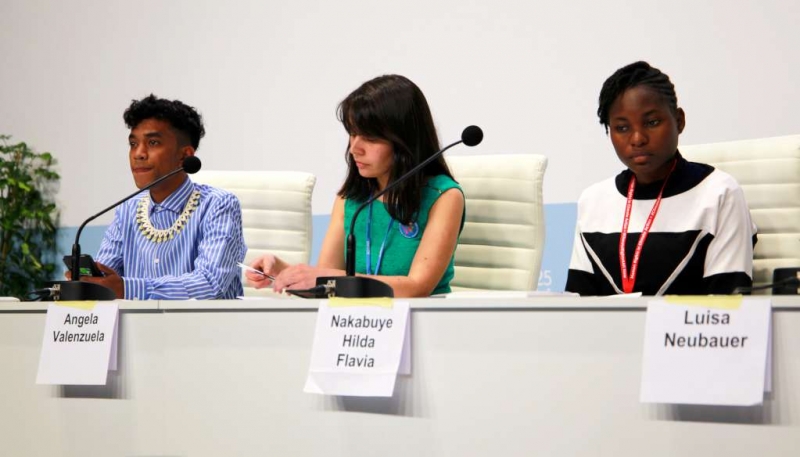 MADRID Spain (PAMACC News) - The Chile/Madrid Climate Change Conference taking place at the IFEMA Feria de Madrid, Spain, continued its second week with climate change negotiations going into wee hours of the following dayand statements by heads of state and government, ministers and heads of delegations making their national statement and positions during the high level segment which continues to Thursday this week.

As the time approached 11:30 am, there was a long queue of members of the press at the Mocha Room. One would be forgiven for thinking that all the pushing and shoving was for one to be the first to get the best cup of Mocha coffee to warm themselves in these freezing temperatures. But Mocha Room is the official press briefing room at the United Nations Framework Convention on Climate Change’s (UNFCCC) 25th Conference of Parties (COP25) underway in Madrid, Spain.

What followed later was heavy security around the room and many still fought to catch a glimpse of who the distinguished person being escorted by such security personnel was. This was Greta Thunberg, the young girl who has become the global face of climate change activism.

When Greta took to the microphone, there was apparent disappointment in the room because on this day Greta and Luisa decided that they will not speak to the media. She said that she has had enough of speaking and media attention—of which she is grateful for.

“We have noticed that there is some media attention around us. We thought we could use that attention to render our platform to those whose voices also need to be heard.  Our stories have been told and listened to over time. It is not our stories that need to be told and listened to—it is the others’. It is the people, especially those from the global south. Climate change is not something that will impact us in the future, people are dying from it today. We want to use this platform to share the stories that need to be told and heard,” Greta said.

With that, she handed over the microphone to other fellow youth activists. One by one they told stories of their suffering at the hands of severe climate effects. They spoke of the hopelessness of their people and the possibility of their doomed future and diminishing dreams.

One youth that caught the attention of the roving cameras and flashing lights was Hilda Flavia Nakabuye from Uganda. Hilda reckons that the laissez faire approach toclimate crisis by world leaders is a sure sign that they do not care about the future generation.

A visibly upset Hilda narrated of how Africa has been ravaged by extreme weather events caused by climate change. She equated climate crisis in Africa to racism and apartheid that her ancestors endured.

“We are suffering severe effects of climate impacts as if coming from the global south is a mortal sin with no or very little action from developing countries. I have come to think that climate crisis is another form of environmental racism and apartheid,” she said adding that the actions, words and greed by those in power and developing countries are leaving “deep cuts and scars to our unborn children in the coming generation.”

She therefore, called on developed countries to exercise their moral duty and clean up their mess.

“How many more lives must we lose forthe world to take action?  Which type of storm or what flavour of floods must Africa taste for us to get climate justice?How many more classes must we skip for the world to know that we are suffering the most? Developed countries must be ashamed of themselves given the amount of carbon they emit compared to what Africa is emitting. We emit almost nothing but we are suffering the most,” she said.

Hilda had some strong words against the fossil fuel industries who she said are turning the dreams of many African children into nightmares.

“You have dreams, but we have dreams too. But these dreams have turned into nightmares, nightmares of our future which is being negotiated by world leaders without our say—same way it is being destroyed by fossil fuel industries funding and present at the COP even as I speak right now,” she said.

She called for concerted and concrete action to stop the climate crisis.
There is generally slow progress of talks at the COP25 as parties try to iron out some sticky issues before coming to an agreement.

(This story has been made possible by Internews-Earth Journalism Network)