Africa agree to speak with one voice to meet climate targets 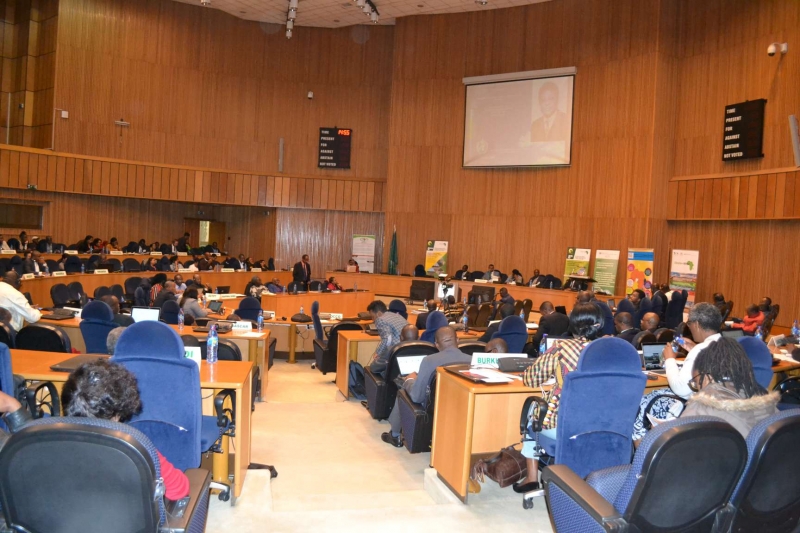 ADDIS ABABA, Ethiopia (PAMACC News) - Climate change experts, policy makers, Africa Union, representatives from the United Nations among other players attending  the 8th edition of the Climate Change and Development in Africa Conference ( CCDA), in Addis Ababa in Africa have agreed to  fast track efforts to meet climate change commitments in line with the Paris Agreement.

"It is very evident the different stakeholders in the fight against climate change in Africa have ambitious programs to walk the climate talk. But we are conscious that not much can be achieved in this direction if we work in isolation,’’ noted PACJA executive secretary Mithika Mwenda at the opening of the conference.

The different speakers at the conference corroborated the view that there has so far been a lackluster approach to implementing the Paris Agreement necessitating a more results oriented approach.

“One of the main objective of this conference is to come up with concrete actions and a common position to better make Africa’s voice heard in the upcoming UN Climate conference in the US,’’ said Linus Mofor, senior environmental affairs officer in charge of energy, infrastructure and climate change at the African Climate Policy Centre of the United Nations Economic Commission for Africa.

The 2019 CCDA 8th conference accordingly is c o-organised by the Economic Commission for Africa of ECA, the African Union Commission (AUC), the African Development Bank (AfDB) and the Pan African Climate Justice Alliance,PACJA.

This year’s conference accordingly is organized under the theme: “Stepping Up Climate Action for a Resilient Africa: a Race We Can and Must Win”.

He however regretted that despite efforts on the ground, climate change effects like droughts are putting our energy security and reliability at risk, with significant economic and social impacts.

‘’Without urgent actions to tackle these climate challenges Africa will not meet the targets of the different sustainable development goals,’’ the minister cautioned.

“As countries raise their climate ambition, we must remember the fundamental principle of the United Nations Framework Convention on Climate Change, which calls for wide cooperation by all countries and their participation in an effective and appropriate international response, in accordance with their common but differentiated responsibilities and respective capabilities and their social and economic conditions,” he said.

Experts agree Africa contributes least to global emissions but  suffers the most adverse impacts from climate change.  Statistics from the Economic Commission for Africa, ECA shows that the Continent contributes under 6% of emissions, with per capita emissions of only 0.8 tons per year, well below the global mean of 5 tons, and far lower than for other regions such as Europe and Asia.

According to ECA chief  Opoku-Mensah this special CCDA-8 is being held ahead of the forthcoming UN Climate Action Summit in the US which is calling for urgent and concerted global action to fight climate change.

“This is a last wake-up call to all countries to raise their game and step up climate action for multiple social, economic and environmental wins,” she stressed.

She revealed that ECA in collaboration with partners was driving a series of climate actions in that direction including  Climate Research for Development in Africa (CR4D), which strengthens the links between climate science research and climate information needs in support development planning in Africa; The Africa Climate Resilient Investment Facility (AFRI-RES) - a joint initiative of the ECA, the World Bank, the AUC and the African Development Bank; and the DFID-funded Weather and Climate Information Services for Africa (WISER).