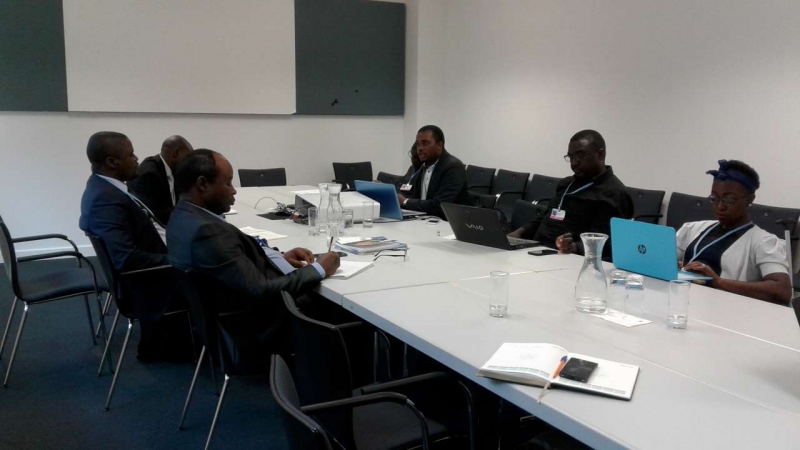 BONN, Germany (PAMACC News) - Climate finance remains a crucial topic at the UN climate talks, as it is the core aspect for implementation of the Paris Agreement.

Key issues include fulfilment of climate finance commitment of USD 100 billion per year by 2020, by the developed country Parties as well as transparency and accountability modalities.
It is against this background that civil society groups attending the SB50 talks in Bonn have warned the African group of negotiators to stay alert to manoeuvres by the global north to push for climate loans in place of grants.

“We are gravely concerned by the trend of commercialising climate action to an extent that the poor people who are supposed to benefit from these finances are left out or are just being used for business interests,” said Mithika Mwenda, Pan African Climate Justice Alliance (PACJA) Executive Director. “The narrative of loans and other false solutions on climate financingare not welcome. The poor people who are on the frontlines of the climate crisis are urgently looking for real solutions. We therefore urge the African Group of Negotiators to remain steadfast and not fall for the carrots being dangled by the global north."

Mwenda said developed countries should just show leadership and live up to their responsibilities by cutting carbon emissions and financially support climate action to address what they caused through their industrialisation activities over the years.

And commenting on the concerns, Zambian delegation Coordinator, Carol Mwape Zulu said Zambia is opposed to the commercialisation of climate financing as it goes against the spirit of the convention which respects common but differentiated responsibilities.

“The convention is clear on the responsibility of developed countries to provide financial and technical support to developing countries as a moral obligation to address climate change based on the historical context of the climate crisis,” said Mrs. Zulu. “This is also in view that loans overburden our small economies as developing countries.”

She said the priorities of African countries revolve around adaptation which is more of a social service than an income generating/revenue source as compared to mitigation measures such as carbon markets that have a revenue component.

“In this case therefore, grants become the main and preferred form of support to developing countries. At this session, Zambia has been making submissions for the financial budget of the convention for both the GCF and Adaptation Fund to prioritise grants for adaption in developing countries.”

After the landmark Paris Agreement in 2015, it was realised that the colossal sums of money needed for its implementation would require the private sector to get involved.
And at COP 22 in Marrakech, a full day was dedicated to Business and Industry at which it was agreed that business had a significant role to play in enabling the global economy to achieve – and exceed – its climate goals.

As a major source of greenhouse gas emissions, the private sector was seen as a crucial partner in securing a prosperous and sustainable low-carbon economy for all.
But with these concerns being raised about climate finance commercialisation, it could be important to revisit the private sector’s involvement in climate action especially on the modalities for financial support from developed to developing parties as enshrined in both the convention and the Paris Agreement.