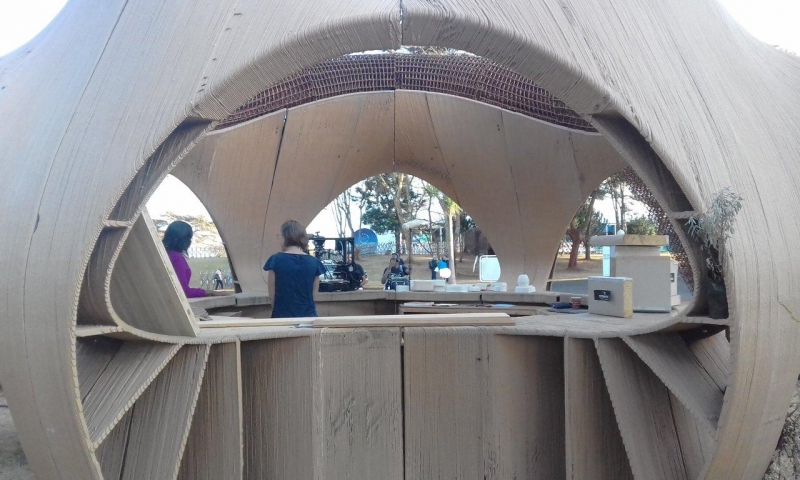 NAIROBI, Kenya (PAMACC News) - She is a grower and exporter of fresh produce, but Elizabeth Thande is also a champion of an often ignored variety of greens: indigenous vegetables.

Even when she is invited to international meetings like the Agriculture for Food Security, her presentation hardly ends without convincing scientists that switching to traditional greens is the way to go for Kenya to achieve smart food security.

It is for a good reason. As Kenyans grow richer, they are demanding healthier foods from the farm. But the pressures of climate change like prolonged droughts and floods are depleting soils forcing farmers to use fertilizers to increase productivity at their farms.

However, the use of fertilizers at the farm is leading to increased pollution of rivers, lakes, oceans, and even the land itself, warns the Frontiers 2018/19 report, released March, at the United Nations Assembly (UNEA) in Nairobi.

“Humans have massively scaled up the manufacture of fertilizers to sustain a growing world population. However, these are leading to pollution, contributing significantly to declines in air quality, deterioration of terrestrial and aquatic environments, exacerbation of climate change and depletion of the ozone layer,” warns the report.

And this is why Thande is doing things differently. At her P.J Flowers farm in Limuru, central Kenya, rows of flowers fruits and exotic vegetables dot a large section of her land.

But she is more attracted to another section, albeit smaller, where a mix of indigenous greens like amaranth, nightshade and spider plant are thriving.

“I grow indigenous vegetables which I sell locally. I am passionate about them because studies have shown these greens are medicinal,” says Thande.

According to her, they also use less water at the farm compared to exotic vegetables, hence they can flourish on land whose soils are facing nutrient and moisture decline.

Thande says exotic vegetables like cabbage require a lot of chemicals to keep off pests and enrich the soil, but they still score low in terms of nutrition when compared to indigenous ones.

However, she says, she does not use chemicals at her farm but uses natural ways to keep off pests while applying organic manure enriches the soil.

“The beauty about indigenous vegetables is that they are short term. Most of them take one month to grow then one can harvest,” says Thande, who is also a member of the African Women in Agribusiness Network (AWAN).

Thande may be trying to feed her community in a small but smart way, but such efforts by farmers are a big subject of discussion at the 2019 UNEA meeting.

According to Mark Sutton, an Environmental Physicist at the Center for Ecology and Hydrology in the UK, her decision not to use chemicals can also feed humanity thousands of kilometers away from her farm.

For instance, Sutton says, when chemicals are washed away from farms, they drain into lakes, rivers, oceans and other aquatic bodies.

In the case of ocean pollution, more nitrogen and phosphorous would make algae to thrive. This, he says, is good for some fish species, but not the wider variety.

“To some degree some fish will like high algae levels. So more nitrogen and phosphorous gives you more algae and more food for the fish. So in a certain way some fish will increase,” he says.

However, after a while the algae will die. And when they do, they start decomposing consuming all the oxygen in the water. When the oxygen levels are depleted, the fish cannot breathe.

“That is when you get dead zones when the fish suddenly die. Very high nutrient loading tends to reduce diversity because of a nutrient invasive system,” says Sutton.

He warns that if Africa were to double farm inputs, the result would be massive increase in pollution in terms of air and water quality deterioration.

“We need a careful approach on how to increase inputs while reducing pollution that seeps into the environment. This is a big challenge for the science of the future because I do not think anybody yet can tell us how we would achieve that,” he says.