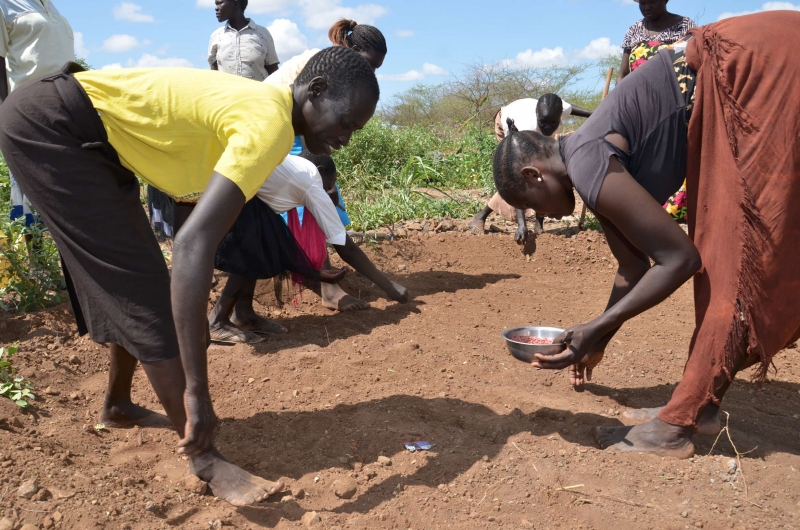 Women working on a group farm in Kenya's Turkana County

NAIROBI, Kenya (PAMACC News) - When you move into gender people ask you what’s the business case, why does it matter? The truth is, for a long time gender equality has been viewed as just a human rights imperative, but latterly women’s contribution to the global economy has been under scrutiny.

In 2015 the McKinsey Global Institute came out with a report that looked at what would happen if we started to close the gender gap and gave women the same opportunities as men. They used a ‘best in region’ scenario, where all countries match the rate of improvement of the fastest improving country in their region. They found that $12 trillion could be added to global GDP by 2025.

Nowhere is the gender gap more striking than in African agriculture. The United Nations’ Food and Agriculture Organisation (FAO) did some analysis that showed because women have lower access to land, seed, fertiliser and mechanisation: married women receive 2% of extension services and as head of households this figure rises to 5%. Just from closing these input gaps productivity in women’s fields could be increased by 20 to 30%. That would immediately lift 180 million people out of hunger.

So now there are numbers next to it, there is a compelling business case for female focussed programmes. But directing that focus is important. AGRA’s women in agriculture strategy aims to unlock farming as a business for women. In the run-up to World Women’s Day on 8 March I want to look at how that differs from how we do it for men.

The end goal is the same – lift people out of poverty and give them a better life– but the pathway to doing it for women and men can be very different.Because we live in a gendered society a woman faces a different set of challenges as she goes about her daily business: she may not have the same mobility, sometimes a woman might not even be able to leave her home without permission from a man;she has huge time constraints, performing as much as four to six hours of extra work every day cooking, cleaning and looking after the children;she doesn’t have access to assets, she doesn’t own the land that she farms, so she can’t get credit and she doesn’t want to invest in the land because she doesn’t own it -why add nutrients to the soil when it’s not her land and could be taken off her at any time? These are a whole different set of challenges often not faced by men.

Women account for about 5-10% of business owners in cash value chains, mainly their participation is limited to working in the fields and they are often absent when the family’s farming produce is sold. More female-owned land may counter this, but land ownership is a complex issue to tackle.Concentrating on agri-businesses, higher up the value chain,is one pathway to women’s empowerment; if the business is off  farm we avoid many of the gendered barriers at the household level. We’re trying to impact 30 million farmers and it is resource intensive to change the gender dynamics of millions of households,but if we can build agribusinesses owned by women, who in turn buy from other woman, we are going to see the benefits and opportunities. For this reason, AGRA’s women in agriculture strategy focusses on off-farm agribusinesses, as well as farming, interventions.

Of course, many of AGRA’s non female-focussed projects benefit women. Ghana’s TROTRO Tractor is a powerful platform that connects smallholder farmers and tractor operators. A bit like a tractor Uber service, when a smallholder farmer needs to plough they can summon a local tractor owner to come and do the job. The farmer gets the mechanisation when needed and the tractor owner makes full use of their asset. The interesting thing about this programme is that in a country where rural female land ownership is rare, nearly 25% of TROTRO Tractor users are women – a significantly higher uptake than would be expected considering the gender gap not just in land ownership, but also mobile phone access.

Policy also needs to play a role; almost all policy dialogue is between men. So, it’s important to get women into apex organisations who can represent the voice of women. But for them to be able to do that they need to be taught how. You can’t just drag any women off the farm and put her in a policy dialogue, she needs coaching; taught how to be an advocate, how to use evidence-based lobbying, how to be persuasive, and the confidence to conduct policy dialogue. It doesn’t happen overnight, but once you have her and she can say “I represent 500,000 women smallholder farmers”, or “I represent most of the women doing cross-border trade in East Africa”, then they’ll give her a seat at the table.

So back to the McKinsey report and closing the gender gap. Using their ‘best in region’ scenario the uplift in GDP for sub-Saharan Africa is $300 billion by 2025. If you still need a reason for women inclusive projects, it’s right there.
END...................

Amanda Satterly, is the Head of Gender at Alliance for a Green Revolution in Africa (AGRA)