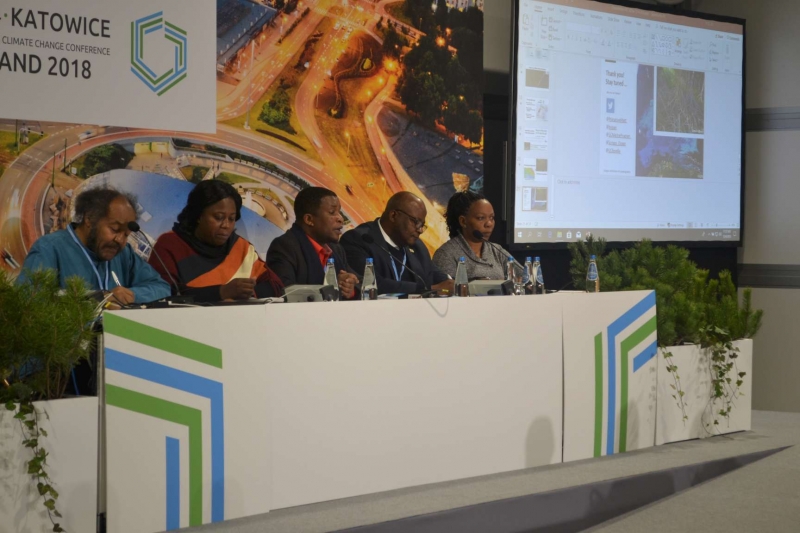 KATOWICE, Poland (PAMACC News) - The Africa civil society organisations under the umbrella of the Pan African Climate Justice Alliance (PACJA) have called on the negotiators at the ongoing United Nations climate conference in Poland to come up with a comprehensive work plan that will help in implementation of the Paris Agreement.

“We join the African Governments and experts in underscoring the vital importance of ambitious outcomes from this conference,” said Mithika Mwenda, the Executive Director at PACJA.

Sudanese scientist and climate activist, Dr. Shaddad Mauwa also said that climate finance should be taken seriously as a critical issue of negotiations for COP 24. “We expect a clear roadmap for fulfilment of climate finance commitment of USD 100 billion per year by 2020,” he told a team of journalists in Katowiche.

Dr Shaddad said that parties should agree to discuss a new post - 2025 quantified climate finance goal from the floor of USD 100 billion, and also agree on accounting rules for climate finance that are robust and provide full transparency on actual assistance provided and to be provided to the developing countries.

The activists also pointed out that there is need to focus on how Adaptation Fund will serve the Paris Agreement. “Parties should agree on maintaining the current balance of the Fund’s board membership, operational policies and guidelines for developing countries to access the funds when it serves the Paris Agreement,” said Shaddad.

They called on parties to negotiate on the Nationally Determined Contributions timeframe in relation to the Paris Agreement. They noted that a single five-year common timeframe for NDC implementation should be agreed at the ongoing COP 24 in order to enhance consistency and comparability of NDCs.

On loss and damages, the civil society representatives pointed out that Africa continues to suffer enormous economic losses in billions of dollars as a result of climate change impacts.

“It is worrying to keep hearing the answer for loss and damage as insurance, this might be possible in developed countries but in developing countries especially in Africa, it is a far-fetched dream,” said Mithika. “We call for the commitment in the implementation of the Warsaw International Mechanism on Loss and Damage and need a predictable a financing approach for Loss and Damage in Africa,” he added.

Rebecca Muna, the Director of Civil Society Forum on Climate Change (FORUMCC) in Tanzania noted the importance of gender considerations in policies that supports activities on adaptation, mitigation, finance, technology development and transfer, including capacity building.
“We call for Parties to increase their efforts in ensuring that women are represented in all aspects of the Convention process, and gender mainstreaming is achieved in all processes, and activities of the Convention,” she said.

“We are calling on parties here in Katowice to fresh energy and push the negotiations towards concrete outcomes that will address this grave concern to Africa. The world is watching and the outcome from this COP24 as it will determine whether the Paris Agreement will be a reality or a mere rhetoric,” said Mithika.