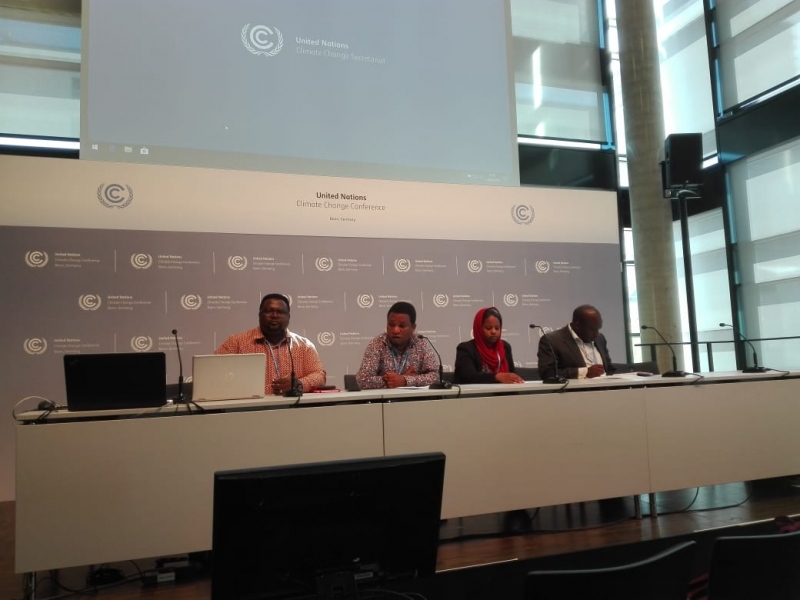 Speaking to the media on the opening day of the SB50 (2019 mid-session climate talks) in Bonn on Monday, Mithika Mwenda, Executive Director of PACJA, said the civil society movement was attending this year’s talks with fresh disturbing memories of recent impacts of extreme events in Africa especially in Mozambique, Malawi and Zimbabwe.

In apparent reference to Cyclone IDAI that earlier in the year, destroyed property and led to loss of life in the aforementioned countries, Mwenda said the African continent was under extreme pressure more than ever due to these extreme events, hence the call for urgent climate action.

“We join the African Governments and experts here in Bonn for the SB50, with very disturbing memories of recent impacts of extreme events in Africa especially in Mozambique, Malawi and Zimbabwe,” said Mwenda. “The Africa Civil Society therefore calls for urgent climate action and support to addressing such extreme events. In Katowice last year we called for a comprehensive and balanced Paris Agreement Work Programme to be delivered that upholds equity, justice and act as an anchor in the Paris Agreement’s implementation and this ambition is not yet realized,” he lamented.

Loss and Damage
For the African civil society, loss and damage has been a key talking point. They have consistently called for commitment in the implementation of the Warsaw International Mechanism on Loss and Damage and the need for a predictable financing approach for Loss and Damage in Africa.

The argument is that Africa continues to suffer enormous economic losses in billions of dollars as a result of climate change impacts. And in the wake of cyclone IDAI, this argument has gained momentum, and the civil society leaders made sure that the global community gathered here in Bonn is reminded of this fact.

The civil society movement further argues that there are several un-costed social losses due to climate induced displacement of persons, among them, conflicts.

“In Mozambique, 3 million people are affected, with estimated USD 1.4 billion in total damage, and USD 1.4 billion in losses. The recovery and reconstruction is estimated to be 2.9 billion USD. In Malawi, the President has declared a state of national disaster due to devastating floods, where more than the lives of 870,000 people are affected. A post-disaster assessment done by World Bank and UNDP indicate around USD 222 million is needed for the recovery. In addition, in Zimbabwe El Nino induced drought has affected 5.3 million and 234 million is required to avert hunger. It is worrying to keep hearing the answer for loss and damage as insurance, this might be possible in developed countries but not in developing countries especially in Africa, this is a far-fetched dream” recounted Mwenda.

Climate Finance
Climate finance is the life blood of the Paris Agreement implementation. However, it has over the years of negotiations, been a sticky issue between the developed and developing countries, in terms of commitment and actual disbursement, as well as on modalities for accounting what constitutes climate finance. As one of the major contributors, the withdrawal of the US from the PA for example, further complicated the commitment by the developed countries, of USD 100 billion per year by 2020.

The African CSOs therefore want this commitment to be honoured and a further promise to replenish the GCF coffers.
“We expect a clear roadmap for fulfilment of climate finance commitment of USD 100 billion per year by 2020 should be agreed, the commitment should include towards an ambitious Green Climate Fund (GCF) replenishment. Parties should also agree to discuss a new post-2025 quantified climate finance goal from the floor of USD 100 billion,” said Mwenda, adding that there should be a clear linkage between articles 9.5, 9.7 and 13.

These relate to provision by developed countries, of both quantitative and qualitative information on finances to enhance accountability and transparency.

“As the African Civil Society, we believe that the accounting modalities to be used by developed country Parties on financial resources provided and mobilized through public interventions via the transparency framework must reflect the information provided in the biennial indicative communication of support,” stated Mwenda.

Adaptation
Despite its negligible contribution to global warming causing carbon emissions, eventually leading to climate change, Africa is said to be the hardest hit in terms of negative effects of climate change. And the continent’s limited coping capacity worsens the situation.

Adaptation is thus a key component for Africa; communities such as the cyclone IDAI hit Mozambique, Zimbabwe, Malawi and the drought stricken parts of Zambia need support to adapt.

Agriculture
Closely linked to adaptation for Africa, is Agriculture; which is a key economic driveron the continent. The CSOs welcomed the progress achieved to date by the adoption of decision 4/CP.23 on the Koronivia Joint Work Programme on Agriculture (KJWA) representing a major step forward in the negotiations on agriculture under the UNFCCC.

“We recognise the importance of the Koronivia joint work on agriculture to provide recommendations on building the resilience of agricultural and food production systems, and sustainable and predictable access to adequate means of implementation, in particular technology transfer and financing that is predictable and adequate,” said Mwenda.

The African CSOs have also called for strengthened capacity building especially for developing countries, raised ambition on mitigation targets and gender inclusivity in all UNFCCC processes.