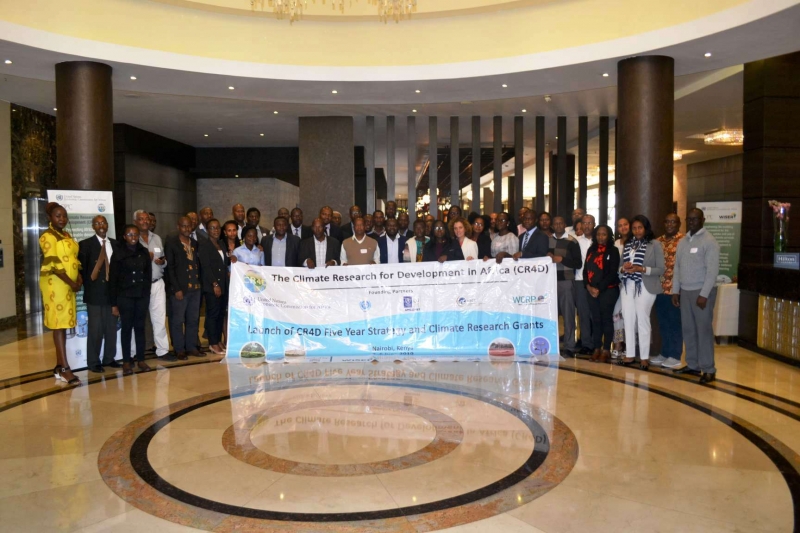 NAIROBI, Kenya (PAMACC News) - Seven scientists from Kenya, Uganda, Tanzania and Ethiopia are among 21 African researchers to receive a grant of up to £100,000 ($127,000) each over the next two years to conduct different studies that will prepare the continent on how to deal with the impacts of climate change.

Through an initiative known as Climate Research for Development (CR4D), the scientists will research on different subjects with an aim of strengthening climate knowledge gaps on the continent in relation to climate sensitive socio-economic sectors such as agriculture and food security, health, disaster risk reduction, energy, and natural resources management (water, forests and others) as well as gender, migration, urbanization, infrastructure, marine and coastal zones among others.

“Understanding of African climate and use of climate information for decision-making are restricted by a number of factors,” said Dr James Murombedzi, Head of the Africa Climate Policy Centre (ACPC) of the UN Economic Commission for Africa.

Dr Murombedzi noted that in Africa, there is inadequate research infrastructure with gaps in climate observation systems, inadequate data to assess the past and current states of the climate as well as communication gaps between climate scientists and decision-makers, vulnerable communities, and development practitioners. “Unveiling of the CR4D research grant is a step towards addressing these challenges,” he said during the launch of the grant ceremony in Nairobi.

The CR4D is an African-led initiative created through a partnership of the ACPC, the African Ministerial Conference on Meteorology (AMCOMET), World Meteorological Organisation (WMO), the Global Framework for Climate Services (GFCS), and the World Climate Research Programme (WCRP). The first research grant is managed by the Africa Academy of Sciences (AAS).

Dr Anderson Kabila, a Cameroonian scientist is one of the grantees who will undertake a research that seeks to bridge the gaps in science, technology and policy by providing decision makers with the information and tools they need for measuring and evaluating the rollout of policies and programmes in East Africa.

So far, Kenya was the first country in Africa to develop and adopt a National Climate Change Framework Policy whose main aim is to enhance adaptive capacity and resilience to climate change, and promote low carbon economy for the sustainable development of the country. The country is therefore one of the most likely beneficiaries of Dr Kabila’s research.

“We have true problems on the African continent and we really need our scientists to help in solving them through demand driven research,” said Dr Judy Omumbo of The Africa Academy of Sciences.

Dr George Otieno, a Kenyan grantee will use his funding to research on how seasonal forecasts can better be improved, including the introduction of climate change information to enhance early warning systems and disaster preparedness for effective response in the Greater Horn of Africa region.

“The fertilisers in the market at the moment consume a lot of energy during the production stage, and in the process, they emit a lot of greenhouse gases which are responsible for the global warming and climate change,” said Dr Kabiri-Marial noting that the new technology emits zero carbon.

Dr Asanterabi Lowassa, a Tanzanian researcher will provide a broad understanding on the impact of gender inequality on the climate change and mitigation measures/coping strategies used by men and women.

Dr Isaac Mugume, another grantee from East Africa (Makerere University – Uganda) will conduct a research with main focus on the implications of the 1.5 – 2.0 degree Celsius to Uganda’s climate, agriculture and water nexus. He will also investigate the probable influence of this temperature limit on crop production and water needs including the influence on rainfall, humidity, winds and cloudiness over Uganda.

It is important to note that last year, through the Intergovernmental Panel on Climate Change (IPCC) special report, the world’s top climate experts warned that there was only a dozen years remaining for increase to global temperatures to be kept to a maximum of 1.5 degrees Celsius above pre-industrial levels, failure to which, even half a degree will worsen the risks of drought, floods, extreme heat and this will have devastating impact on millions of people especially in Africa.

Other grantees from the East African region were Dr Eleni Yitbarek and Dr Mokone Adnew Degefu both from Ethiopia. Others were from the Central Africa, the West and the Southern Africa regions.

“The role of climate research is critically important in decision-making and development, as well as in climate negotiations,” noted Mithika Mwenda, the Executive Secretary for the Pan Africa Climate Justice Alliance (PACJA) – the organisation that spearheaded the drafting of Kenya’s National Climate Change Framework Policy.

“I am hopeful that these scientists will come up with research findings that will help farmers in Africa enhance their production, while at the same time adapt to the impacts of climate change,” said Prof Nelson Torto, the Executive Director for The Africa Academy of Sciences.