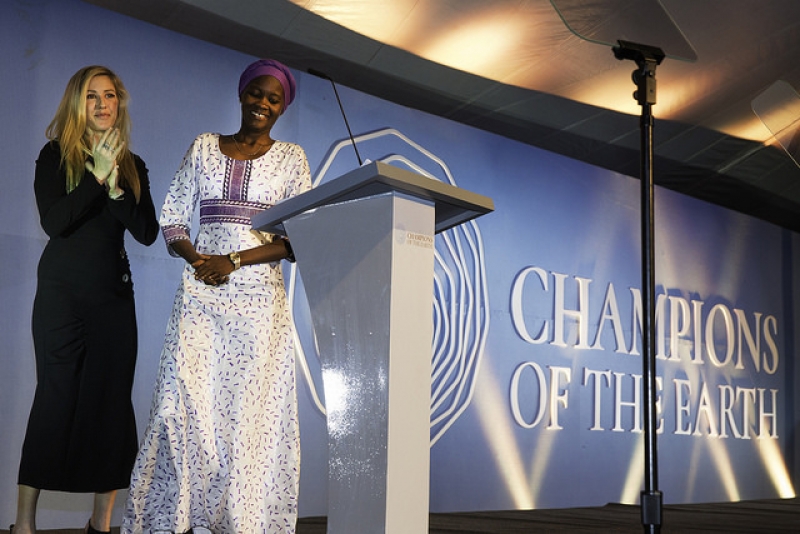 Environmental degradation has emerged as a major challenge of the 21st century, threatening communities and increasing poverty. Societies across the globe have continued to suffer from a persistently unfavourable environmental degradation leading to historical climate change disasters especially among vulnearble communties, experts say.

In a fragile global context, innovative ideas are needed more than ever to protect and conserve the environment and fight against the effects of climate change says Erik Solheim, Executive Director, UN Environment.

It is against this backdrop that the United Nations Environment Programme (UNEP), organised a competition to select the best promising innovative environment projects by young people across the globe. Six projects were finally selected and the winners presented  at  the ongoing UN Environment general assembly December  5, 2017.

The six winners dubbed « Young Champions of the Earth »  according to UNEP officials are talented individuals between the ages of 18 and 30 with promising ideas to protect or restore the environment.

A press release from UNEP notes that the Young Champions were selected by way of an online public vote and the deliberation of a global jury. The six winners selected from over 600 applicants are, Kaya Dorey from Canada, Eritai Kabetwei- Kiribati, Adam Dixon – UK, Liliana Pazmillo - Ecuador, Omer Badokhon - Yemen and Mariama from Burkina – Faso.

Each of the six winners will receive USD 15,000 in seed funding, mentoring, training to help them realize their environmental ambitions.

In a discussion at the award event, the 2017 Young Champions of the Earth  shared their innovative ideas geared at creating positive environmental impact.

Panelist at the event highlighted the role of global youth in sustainable development and, more specifically, the ways and means to empower youth in decision making processes and harness their creativity to effect change and fight against growing poverty and youth unemployment..

Erik Solheim, Head of UN Environment and Ellie Goulding, UN Environment's newest Goodwill Ambassador, joined the conversation with emphasis on what it means to be an environmentalist in 2017.

Apart from receiving seed-funding, the winners will also get intensive training, tailored mentorship and global publicity to help them bring their big ideas to life.

Among the winning projects is that of Mariama from Burkina Faso who wants to address the energy deficit in Africa and the devastating degradation of cropland caused by chemical fertilizers. Her project, “JACIGREEN", offers an innovative eco-solution to the problem of water hyacinth, which, she says without controlled management, can be devastating for the environment.

Water hyacinth she says is an invasive alien species that grows very rapidly in the waterways of the Niger River. Although not inherently harmful, initially purifying the waterway in which it grows, water hyacinth becomes a problem once it reaches a certain maturity by suffocating aquatic life. JACIGREEN  says she will introduce a plant-based purification mechanism to help manage fresh water sustainably and improve access to drinking water. It will simultaneously implement a system to produce organic fertilizer (via anaerobic composting) and electricity (from biogas recovered from the water hyacinth transformation process).

Another winner Adam Dixon will use horticultural innovation to tackle food insecurity and habitat loss.

What began as an appreciation of gardening from joining his mother while she pottered in the backyard became a fascination with plant growth and a drive for innovation. Dixon’s Phytoponics technology enables food crops to grow in water encased in a 100 percent recyclable polymer film, improving irrigation efficiency and reducing the amount of land use needed for horticulture.

In just one year, Dixon has built his company up to the value of $2.6 million and is supplying Europe's second largest producer of salad. Dixon’s cost-effective, rapidly deployable product is now being piloted by the World Food Programme in refugee camps to support the supply of fresh produce to thousands of people in what are often uncultivable, barren locations.

Canadian fashion designer Kaya Dorey’s unique apparel business not only delivers on sustainability but also an urban street style for a generation wanting to end wasteful consumerism of 'fast fashon'. Her ‘conscious apparel company’, NOVEL SUPPLY Co., produces garments free from toxic dyes and synthetics, and seeks to source hemp and organic cotton as well as environmentally friendly inks. The business is based on the ‘closed-loop’ philosophy of production, which strives for sustainability by improving economic and environmental goals simultaneously.

Ecuadorian biologist Liliana Jaramillo PazmiñI for her part is bringing back flora and fauna and reducing air pollution and vulnerability to natural disasters by encouraging more use of native plants in the green rooftops of our urbanized planet.

Beginning in her native city of Quito, Ecuador’s capital, a towering city with high rates of air pollution that causes inflammatory disease, Liliana has focused her research on identifying and cataloguing which native plant species are better adapted to urban environments and resilient to climate change. As more of the world’s population inhabits dense urban environments, Liliana hopes her research into which plants can best save and serve the environment will be replicated across other urban settings.

She says she dreams of a future where the urban sprawl sees cities bursting with green life across their concrete structures.

Yemeni engineer Omer Badokhon is working on biogas plants which aims to improve thousands of rural livelihoods in his war-stricken homeland. Omer, who holds a degree from Hadhramout University, researched the production and purification of biogas from landfills to generate electricity as part of his studies. He quickly realized that such devices could be put to good use at a domestic level in his country, and set out to do this himself.

The devices, which will be constructed locally under Omer’s guidance, enable the rapid decomposition of domestic organic waste, thereby maximizing the amount of biogas produced. He is working with a non-governmental organization affiliated with the Green Projects Centre to build prototypes and pilot the biogas plants.

Kiribati citizen, Eritai Kateibwi for his work on a hydroponics system that will improve human health and resilience to climate change on the low-lying island. He saw the problems caused by Kiribati’s reliance on imported, often unhealthy, food due to the challenges of growing fresh produce: diabetes, unhealthy children and a garbage problem from dealing with the packaging.

He realized that locally grown, nutritious food would reduce these problems, as well as provide entrepreneurial opportunities to the local communities. Eritai’s system, which relies on Kiribati’s abundant sunshine but uses only 10 per cent of the water of traditional crops, has already been used to produce lettuce, Chinese cabbage and tomatoes within 30 days.

He plans to use the seed financing from the award to build 200 units. Families will receive training and purchase these through micro-financing, the proceeds of which Eritai will use to build and make available more units.