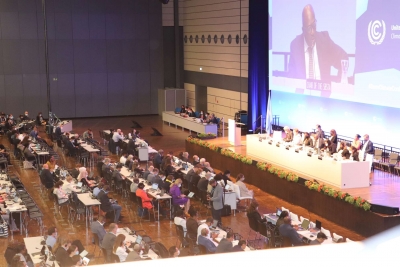 Delegates at the SB 56 in Bonn : >> Image Credits by:Isaiah Esipisu

BONN, Germany (PAMACC News) - Developing countries under the banner of G-77 & China have called for establishment of a dedicated “Loss and Damage Finance Facility,” and relaxation of several complexities barring access to the Green Climate Fund (GCF), as the 56th session of the subsidiary bodies (SB-56) under the United Nations Climate Change Conference (UNFCCC) kick off in Bonn, Germany.

“The G-77 & China is united in our ask for the establishment of a dedicated “Loss and Damage Finance Facility” as an intended tangible outcome to which the Glasgow Dialogue on Loss and Damage must contribute,” Ambassador Akram told delegates at the ongoing SB-56 conference in Germany.

According to the G – 77 & China, substantial progress must be made at the ongoing conference in terms of agreement on its structure, operating modalities, and other aspects, while doing so in a manner that will ensure that the Santiago Network is fit for purpose in light of its functions as agreed in Warsaw, to catalyze and deliver on the ground the technical assistance and other support needed by developing countries to avert, minimize and address loss and damage arising from climate change.

For example in Africa, several communities in Malawi, Madagascar and Mozambique are yet to recover from different cyclones that bedevilled the region in the recent past. According to a recent study released by the World Weather Attribution (WWA) group, the tropical storms that hit the region earlier this year were made worse by the increase in global temperatures, making such communities eligible for support from the Loss and Damage Finance Facility.

In the same vein, the G-77 & China further said that there is urgent need to bridge the huge gap between adaptation planning and implementations.

“On progress of the National Adaptation Plans (NAPS), there seems to be some disconnect between what is being planned, and what is being implementation on ground. Discussion on adaptation continuum must be connected with a reliable financial mechanism,” said Ambassador Akram noting that it is only implementation that will fulfill the objectives of the NAPs.

However, the G-77 & China noted that main challenges remain in accessing GCF support due to a myriad of complexities surrounding the GCF NAP readiness Support Programme. Procedural complexities, un-standardized formats and long review processes of submitted proposals are but a few examples.

According to the latest report by the Intergovernmental Panel on Climate Change (IPCC), vulnerable countries will not be able to adapt to global warming beyond the 1.5°C limit. The Working Group 3 for the report shows that countries are not on track, but also makes it clear that it is still possible to limit warming to 1.5°C.

In the same breath, Ambassador Akram expressed confidence that this year, there is a clear expectation from developing countries to see substantial progress on key deliverables and outcomes on adaptation, including on the Global Goal on Adaptation, at SBs-56 as well as at COP-27, which will be held in Egypt towards the end of the year.

The SBSTA and the SBI are bodies that give advice to the Conference of Parties (COP), and each has a specific mandate. They are both open to participation by any Party, and governments often send representatives who are experts in the fields of the respective bodies.