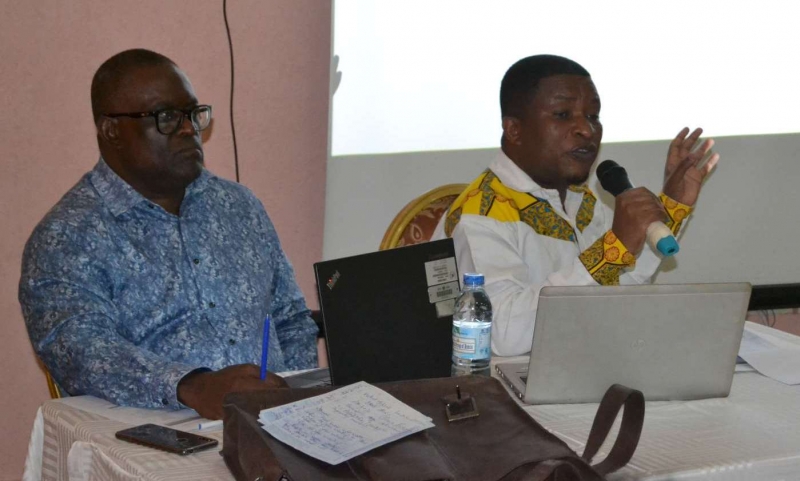 Mithika Mwenda (right) in a recent event in Entebbe, Uganda. Looking on is Dr James Murombedzi of the ACPC : >> Image Credits by:Isaiah Esipisu

ACCRA, Ghana (PAMACC News) — Mithika Mwenda, the Executive Director of the African Climate Justice Alliance (PACJA), was today named among the “World’s 100 Most Influential People in Climate Change Policy 2019”. It is the first time such a list, which will become an annual tradition, has been compiled. Only five other Africans are on the list.

Apolitical, the global network for government, curated the list after screening hundreds of nominations by public servants from around the world, including experts at the United Nations Development Program (UNDP), Harvard University, Oxford University, Bloomberg Philanthropies, NGOs and more.

“The list highlights people currently making the biggest impact on climate change policy… Those recognized include high-profile advocates whose work is indispensable to raising awareness and demanding change. Others are rising stars who are making their mark in local communities and are a driving force behind governmental progress,” Apolitical said in a statement.

Mr Mwenda said in Accra, Ghana, where his organisation is co-hosting the Africa Climate Week with the UNFCCC: “This is a great honour and not only to me as an individual. It is more than anything else a recognition of the work PACJA has put in for more than a decade to shape just, fair and equitable climate policies and action in Africa and globally. I wish to extend my gratitude to all our members, affiliates and partners who have believed in our vision and assure them of our continued commitments to pursue our shared vision in the ensuing transition to a low-emission, climate-resilient future.”

The climate policy and action community in Africa has welcomed the distinction.

Jame Murombedzi, Chief, Climate Change Unit and Coordinator of Addis Ababa-based Africa Climate Policy Centre (ACPC) said: “It has been evident for some years that effective climate policy and action  requires more than state actors. During the build up to COP21 in 2015, there was incredible expectation that the world would deliver a framework capable of regulating  climate actions and ensuring that we achieve a stable climate system. This process also recognised that there was a need to engage CSOs and other non-state actors in ensuring a global governance regime and also in holding state actors accountable.

“On the African continent, PACJA emerged as the leader in convening African CSOs and mobilising the participation of the civil society in national and global processes. PACJA played a significant role in linking CSOs with Pan-African institutions, such as the Pan-African Parliament, the African Union Commission, NEPAD, the African Development Bank and UNECA. PACJA ensured that the civil society became an important component of continental climate change initiatives, such as the Climate for Development in Africa program (CLIMDEV AFRICA). All of this was achieved under the leadership of Mr Mwenda, who is indeed recognised in African climate change circles as representing a disciplined and consistent position on climate change and development in our continent.”

Kwame Ababio, Senior Program Officer, Environmental Governance and Climate Change at the African Union Development Agency-NEPAD said: “The role that PACJA has played to bring together CSOs and other stakeholders has galvanised Africa's overall approach to climate change and its related issues on the continent. As a leading voice on climate change issues, PACJA has also played a strong advocacy role in ensuring that issues that affect the ordinary citizens in the most remote parts of the continent are highlight at national, regional and global levels.

Mr Meenda has played a key role in making all of this happen. He has been a very strong voice on climate action issues. Evidently, the support he has provided to CSOs in championing climate issues has led to a better coordination of non-state actors with the climate  change arena.”

Seth Osafo, Legal Adviser at the Africa Group of Negotiators to the UNFCCC processes, said: “I have been involved with PACJA for more than five years now and I think PACJA, under Mr  Mwenda, has been very effective as an advocacy group in bringing to the fore the challenges that Africa faces with regards to climate  change. One thing that I have found very effective from PACJA is the statements and documents they produce on specific climate change issues, particularly during negotiations. These have been particularly useful to the African Group of Negotiator. We see PACJA as a good collaborator with respect to the support they give the African Broup of Negotiators.”

Before founding PACJA ten years ago with a couple of other individuals, Mr Mwenda, a public policy analyst, worked  as a Program Officer with the All Africa Conference of Churches (AACC) from 2009 to 2010. He is currently a PhD candidate at Wits School of Governance in South Africa. He also chairs the institutional Collaboration Platform of ECA-based Climate Research for Development in Africa (CR4D) as well as represents the African civil society in the participants’ committee of the World Bank Forest Carbon Partnership Facility  (FCPF).

PACJA is a continental coalition of Civil Society Organizations with a goal to mobilize and empower African civil society to ensure the realization of environmental and climate justice for all people in Africa. It is the largest consortium of Civil Society Organizations (CSO) with over 1000 members in over 48 countries in Africa, embodying one African voice on climate and environmental justice.

Apolitical is a peer-to-peer learning platform for government that puts the best solutions at the fingertips of public servants, wherever they are in the world. The platform is used by public servants and policymakers in more than 160 countries to connect with each other and to find original and curated content about what’s working in policymaking around the world, including on topics such as digital government and government innovation.