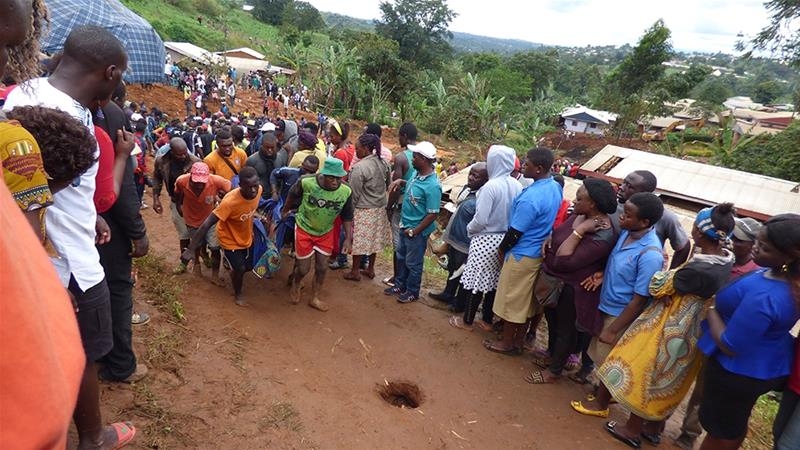 Many more are believed to be still buried in the mud as search for more corpses continue, state authorities announced shortly after the sad incident.

"We can now confirm that over 50 lives have been lost in the incident and close to fifteen houses have been buried in mud," said Cameroon minister of territorial administration,Paul AtangaNji in a press briefing after visiting the site yesterday.

The minister said 80% of those killed are children between 6-15 years and women.

The landslide, which occurred at around 10.30 pm after over a week-long of heavy rains, caught the rural population in their sleep,said the governor of the West region, Away Gonna Augustine.

Major recovery efforts are ongoing in the area,government has announced.

Military and the local population say they are using shovel and local tool in their search .

"We fear using complex machines might hurt someone who could have been saved," said a military officer on the site.
Residents who survived the accident said they heard a loud noise while asleep and quickly rushed out

" I heard a loud bang and jumped out of bed only to discover part of the house has been covered with mud and two of my children trapped under. The rescue team that came in hours later managed to rescue the," said Divine Ngambou, survivor of the landslide.

The minister of territorial administration and that of urban development have issued orders for the population living on the flanks of the hilly area to evacuate.

Rains have been very heavy in most parts of Cameroon in the past few months causing flooding and destroying property,environment experts say.

"These prolonged rains are clear signs of climate change. This was not the case in the past.". said Epie Joseph head of meteorology in the ministry of environment..

Floods and landslides he said are triggered by climate abnormality.

Cameroon President Paul Biya has ordered for immediate financial assistance to be provided to the victims,while receiving treatment in the hospitals are getting it for free.