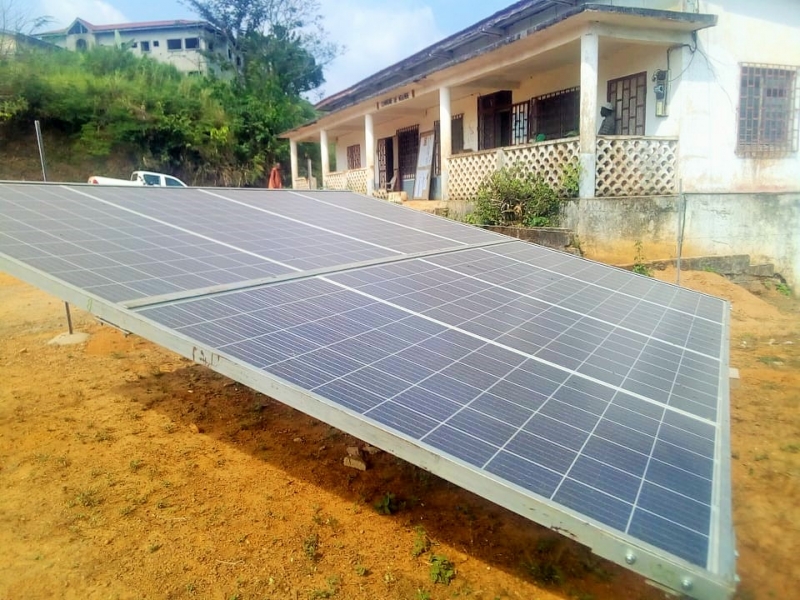 One man’s endeavour is changing lives of many in rural Cameroon and fighting climate change. He is tapping energy from the sun and supplying to hospitals in “forgotten” places.

Ngo Bas was just 14 when she became pregnant. And now, she is 15 and is due at any moment - literally.

“I’m past nine months pregnant,” she says with a grin.

She lives with her grandmother in Ngambe, a remote, forested community in Cameroon’s Littoral Region. Things are hard, her granny says, disturbed that the life of the unborn child is in danger because Bas does not feed well. But that is the least of her worries. Bas is supposed to give birth at Ngambe District Hospital where there is no electricity.

“We have been without electricityfor like… I can’t even remember. The hospital and by extension patients are the most affected” says Dr. Daniel Telep Yede, director of Ngambe District Hospital.

“We use traditional African bush lamps and torches during delivery at night. This is a very very risky venture. Anything can happen to the child and the mother because we don’t usually see what we are doing. We refer worst cases to other hospitals but they are very far away” he adds.
That is what worries Bas and her granny most.

But, Bas’ worries might soon be over. There is good news. Gaston Claude Songo, is about providing the hospital with solar energy.

Songo, 40, is soft-spoken, but he is sure of what he's doing, and has proved a rare skill for seeing the obvious. The idea of supplying renewable energy to remote communities in Cameroon has become a passion for him.

One afternoon inearly 2018 while driving in the hot sun in Douala traffic, Songo, was struck by the obvious.

“Broadly available technology, plummeting cost of solar panels, and free, unlimited sunshine. I realized that this was a gift from Mother Nature. Why should my people suffer when energy is almost free and clean” Songo says with a sense of pride and fulfillment.

Eleven months later, Songo is fully-engaged in a project to supply solar power to hospitals in rural Cameroon.

“It is purely a personal initiative. I provide the energy free of charge. I have been raising some funds for the project through social media campaigns especially on Facebook. People of good of will who believe in helping others and making the world a better place have been of great assistance” he says.
Today, Songo has come to install solar panels in the Ngambe District Hospital.
He is a native of Ngambe and understands better that anyone else what his people are going through.

“As a child I witnessed the suffering my people were experiencing because there was no electricity. It was horrible especially in the hospitals in rural areas or forgotten places. Hospitals are very sensitive and patients need hope. Darkness in hospitals kills that hope” he says while placing two solar panels on the rooftop of the hospital building.“I want to show to the world that without being rich, we can still help others through our skills and knowledge” he adds.

Night is falling and Songo is done with the installation. To the amazement and joy of the villagers, the bulb is switched on and…voila… there is light.

That evening by 8:00 pm, coincidentally, Bas in critical labour arrives the hospital. She is breathless as nurses rush her to delivery room. Things move faster than usual. With ease and comfort of the light, Dr. Yede and his team start the delivery process and few hours later, the cry of a baby is heard. She is delivered of a healthy boy and she is doing well.

“This delivery would have been risky and almost impossible yesterday. At last darkness has been defeated in this hospital” says Dr. Tede breathing a sigh of relief.“We will now be able to work 24hrs, admit patients, perform operations and store some hospital material in the refrigerator” he adds.

“My baby has brought light here. Thanks a lot to technology. Can you imagine what I would have gone through if there was no light” says Bas joyfully.

Local authorites are confident that the advent of light in the community will significantly change the lives of the people.

“Development has been retarded here for long because of electricity. We did not know that the sun can provide energy. Songo has opened our eyes. I am now making it an official policy for Ngambe to tap light from the sun and wherever possible. I can guarantee you that this is going to significantly alleviate poverty in this community” says Gilbert Yede, mayor of Ngambe rural council inhabited by approximately 10,000 people.

Curing climate change
Songo’s success story is a real booster to the fight against climate change that has taken its toll on the livelihoods of people especially in Africawhere droughts, erratic rainfall, floods have become the new normal.

Scientists agree that renewable energy is one of the major ways of mitigating the adverse impacts of climate change because it is clean and does not emit dangerous greenhouse gases into atmosphere.
Renewable energy is energy generated from natural resources such as sunlight, wind, rain, tides and geothermal heat which are naturally replenished.

“A switch to renewable energy is what we need now. Times have changed” says Emmanuel Tabot, environmentalist.

Songo has decided to move with the times by making renewable energy available to people.

“Renewable energy is by action not talking. Africa has sunlight, wind, tides, and rains in abundance. Why don’t we just abandon our old ways of supplying energy and act now to save the world from the dangerous consequences of climate change?”says Songo adding that energy deficiency is a major setback todevelopment in Cameroon in particular and Africa in general. And he’s right.

Most of Cameroon lives in the dark. Cameroon suffers from outages: about ten electrical outages per month, which last an average of two hours each.

Despite the impressive hydroelectric capabilities of the country, only approximately 20% of the population have access to the national grid,with 80 percent of the supply concentrated in urban areas and just 17 percent in rural areas according to the Ministry of Water Resources and Energy.

Apart from hydro power, Cameroon is well endowed with sunshine, and various sources of biomass and natural gas, yet little effort has been put into the development of these energy sources.Renewable energy currently contributes about 1% towards Cameroon’s energy mix according to 2018 government figures.

“One of the factors contributing to the slow implementation of renewable energy in the country is the lack of a defined renewable energy government policy. Government commitment and enthusiasm are essential for promoting renewable energy efforts by both foreign and private sector investors” says Dr. Edouard Mboumboue of the University of Yaounde 1.

Songo’s achievement is a fascinating eye-opener to the government and now, the government plans to boost Cameroon’s electricity access in rural areas as part of its “Vision 2035” development plan, aimed at expanding the economy and slashing poverty to 10 percent.

“What he is doing is a great personal endeavour. It’s encouraging and we will now intensify efforts to supply renewable energy to rural areas in the country” says Joseph Tabe of the Ministry of Water Resources and Energy.

Government intends to supply solar power to approximately 250,000 people in 1,000 rural communities of the country by 2020.

“This will change lives and notably alleviate poverty in rural areas. People like Songo should play a key role” says Tabe.

One of Songo's personal goals is to meet government officials, entrepreneurs and people of good will to seek for partnership or support that will enable him expand his project that he now calls “Solar Energy for my people”.

“What we have done in Ngambe and other places, we can share with local entrepreneurs across Africa and beyond,” he says. “We have the local know-how and engineering, but no means.

Now, we are working and learning how to master technologies on our own and start to invest more in our own confidence to produce local wealth and put a smile on people in rural communities,” he adds.

As long as sunlight is free, Songo wants to supply green energy to “every rural hospital” in Cameroon.

“This energy will not only help the hospitals but will keep local businesses in business, and even provide basic services to villages that have been socially off-the-grid as well” he says.