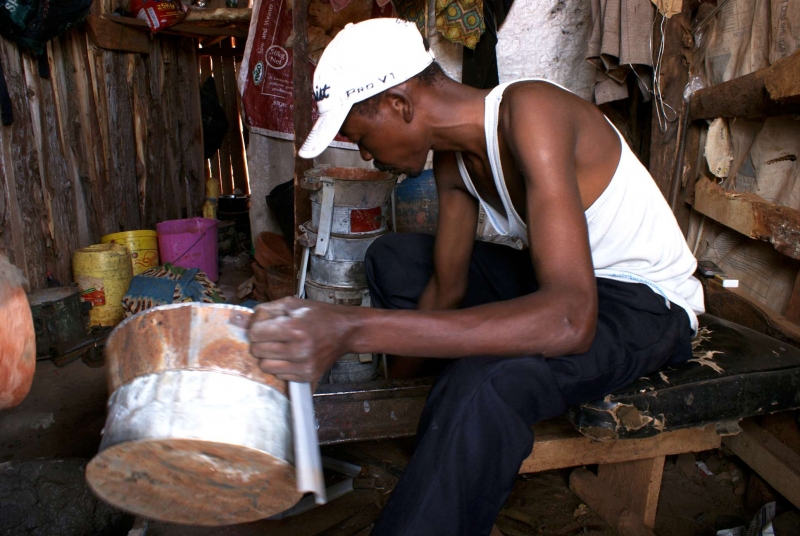 Even after hiring a lawyer several times to represent him in court, his case has never made it past the gates of justice.

Otieno suspects his lawyer was bribed by the organization to drop the case, but he cannot do anything about it since he does not have the financial muscle to keep pursuingit, he says.
“I have tried several times to use a lawyer to take this organization to court. But the lawyer always turns me down. I do not know what to do next,” says Otieno, who is also a member of the Kenya Renewable Energy Association (KREA).

Like hundreds of innovators in Kenya, Otieno is a victim of poor policies that fail to inspire solutions meant to help the country adopt to the pressures of climate change.
But if an October meeting of policy makers in Nairobi that was reviewing progress in the implementation of climate change policies in Africa is anything to go by, Otieno might just be getting there.

“It is time to translate policy on climate change into action to be able to halt emissions and have an organized transition to a carbon neutral future in the shortest time possible,” James Murombedzi, the Officer in Charge of the Economic Commission for the African Climate Policy Center (ACPC), told delegates.

Murombedzi’s reasoning echoes everyday efforts that are being tried by Kenyans like Otieno. To help such civilians, governments must work with all sectors of society despite their interests, because climate governance is complex, says Murombedzi.

According to him, Africa is endowed with sufficient knowledge and technology to battle climate change. The only missing piece is strong policies that support these skills to be able to secure the continent’s preparedness against climate change, he says.

This is why it is becoming difficult for many climate change innovators in countries like Kenya to complete their creations due to policies that protect the beneficiary, rather than the maker of a product, argues Otieno.

“When the government fails to protect Kenyans like me against predatory business players, the spirit of innovation will die because I cannot invest all my time and energy on innovating something I get nothing from,” said Otieno.

Yet, government arms like the Climate Change Directorate argue Kenyans like Otieno are protected by the Kenya Green Economy Strategy and Implementation Plan 2018-2020, which is informed by among others, the need for technology development, innovation and transfer.

Besides, the 2018-2022 National Climate Change Action Plan seeks to set aside Ksh. 11 billion to support technology and innovation and how these skills can be transferred to average Kenyans, argues Charles Mutai at the Directorate.

“The Plan also seeks to ensure that Kenya enhances the use of renewable energy. We are working with other national agencies to promote innovations in this area,” says Mutai.
It is a prospect that raises hopes for troubled Kenyans like Otieno. But experts say a lot of work needs to be done to achieve accommodating and strong climate change policies.
For instance, the current policies are mostly top-down and very technical for the average Kenyan to understand, argues Samuel Kimeu, the executive director at Transparency International (TI), Kenya.

With such policies, he argues, it becomes very difficult to track how climate change finances are spent, making this weakness a breeding ground for corruption.
He is right. Two years since the Kenya Climate Change Act was established, there has never been a public report to show how climate change finances have been spent, critics argue.
Besides, they add, climate change intervention in the country has become an elitist affair, with most of the finances being sucked up by local and international conferences.

“But when there are droughts or floods affecting the poor, the burden of dealing with these calamities is left to the community to solve alone,” says Benjamin Mukulu, the director of environment and natural resource in Kitui County.

But Otieno is not convinced, arguing that corruption is so deeply entrenched into the Kenyan system that everyone is only interested in making quick money.
“I blame the Kenyan mentality. Even if we are given legal lawyers to protect us innovatorsthey will let us down after being bribed. There is a mentality of get rich quick syndrome which is robbing us of our future,” says Otieno.