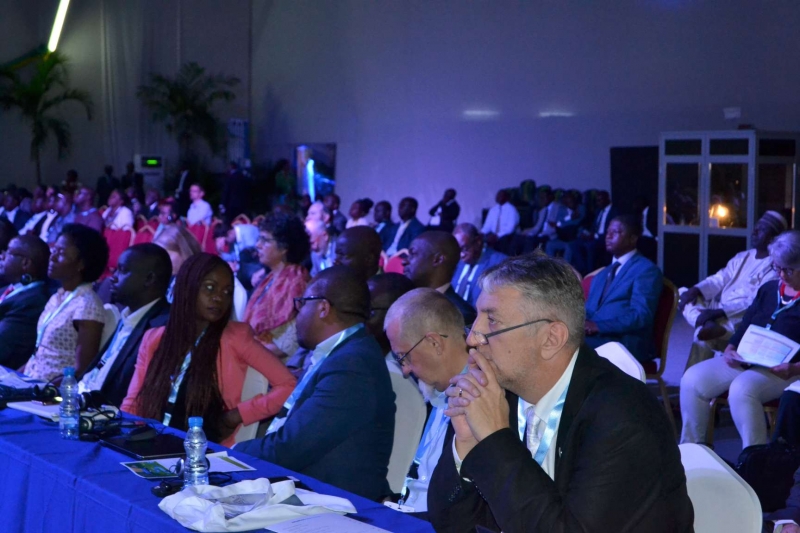 LIBREVILLE, Gabon (PAMACC News) - Water experts, policy makers, government representatives, UN agencies, donors and nongovernmental organisations kicked off the celebration of the seventh edition of the Africa Water Week in Libreville city of Gabon on 29th October 2018, calling on African governments to reflect on achievements made so far towards availing clean water and sanitation services to all.

The one week long event is convened by the African Ministers Council on Water (AMCOW) in collaboration with UKaid supported project for Unlocking the Potential of Ground Water for the Poor (UpGro), USAID, Africa Development Bank (AfDB), The Global Water Partnership (GWP) and the International Water Management Institute.

According to Prof Makame Mbarawa, the AMCOW President and the Minister for Water and Irrigation for Tanzania, the event is a call to action and positions Africa to creatively think, act and win.

One of the objectives is also to create an opportunity to contribute to developing strategies on raising adequate and sustainable financing of water and sanitation agendas.

The 7th Africa Water Week, brings together over 1000 participants from governments, regional institutions, international partners, the private sector, the scientific community, civil society, and the media particularly from Africa

The Africa Union Commissioner for Rural Economy and Agriculture, H.E Sacko Eyogo Leonel Correa urged all African governments to include more water sanitation and hygiene projects in their National Determined Contributions (NDC) to unlock more climate related financing mechanisms such as the Green Climate Fund, Adaptation Fund, AfDB Climate related Funds, and a host of other sources of funding.

Intended Nationally Determined Contributions (INDCs) is a term used under the United Nations Framework Convention on Climate Change (UNFCCC) for reductions in greenhouse gas emissions that all countries that signed the UNFCCC were asked to publish in the lead-up to the 2015 United Nations Climate Change Conference held in Paris. Once the agreement is ratified, the INDCs automatically changes to NDCs.

“I also want to congratulate AMCOW on the launch of the 2018 - 2030 strategy, and therefore, I call upon our ministers to take action, and they should not keep this important document on their shelves,” said Correa, calling on development partners to help in implementation of the tool.

In a video recorded speech to the delegates, Amina Jane Mohammed, the Deputy Secretary General of the United Nations and a former Minister of Environment of Nigeria noted that the challenge of water scarcity is exacerbated by the widening impacts of climate change. “This is both unacceptable, and yet avoidable,” she said.

She called on political leadership to accelerate progress. “In this regard, the United Nations is working closely with the African Ministerial Conference to build momentum for the South South corporations in support for the Sustainable Development Goals.”

Wambui Gichuri, the Director for Water Development and Sanitation Department and Africa Water Facility at the AfDB reminded the delegates that Africa loses an estimated 5% of its Gross Domestic Product to poor water development and management, an estimated 5 to 25% due to climate change impacts, and that more than 300 million people on the continent lack access to improved water supply.