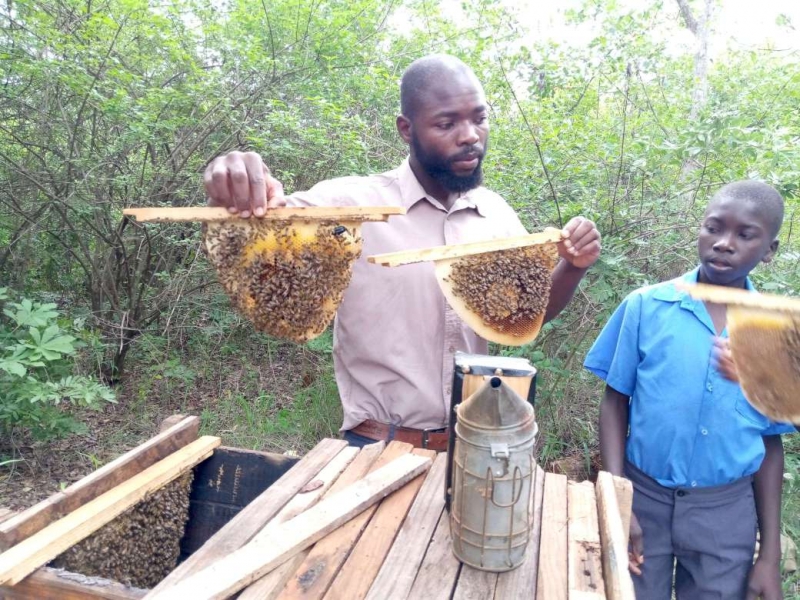 HARARE, Zimbabwe, (PAMACC News) - News On an isolated part of Mpudzi Resettlement Scheme—a sprawling farming community in eastern Zimbabwe—bees hum menacingly as they enter beehives dotted around trees on the banks of a small river.

Though the bees appeared menacing, the beekeeper— 60-year-old Divas Matinyadze— was unperturbed as he inspected an array of traditional hives on a sweltering afternoon.

Matinyadze cautiously checked all the beehives, many of which were made of hollowed dead wood logs. He started beekeeping a few years ago to offset substantial agricultural losses due to severe droughts.

With about 45 beehives, Matinyadze harvests honey twice a year getting about 15 to 20 kilogrammes of honey per hive; earning upto US$60 from every hive.

Amidst severe droughts, the past decade has seen the mushrooming of many beekeeping projects across the country

The Beekeepers Association of Zimbabwe (BKAZ) estimated that there were more than 50 000 beekeepers across the country.
At the same time, more farmers in the country are venturing into cotton farming, buoyed by subsided and free farming inputs from the government and private cotton companies. Though Zimbabwe had been a regional cotton grower, many farmers had abandoned the crop owing to poor prices on the local market.

By 2015, cotton farming had declined to about 28 000 tonnes per year but during the 2019/2020 seasonat least 400 000 farmers benefited from the country’s Presidential Cotton Input Scheme. The presidential cotton scheme input scheme—funded by the Zimbabwe government— is meant to revive cotton farming in the country

And Kennedy Seremani, a cotton farmer in the eastern Chipinge district, is one of the recipients. He said despite the little rainfall in the country this year, his cotton quality was good and he was expecting yields of more than 50 bales of cotton from his 4 hectare piece of land.

“We were given enough pesticides .As farmers we are happy that we received free cotton farming inputs from the government. We’re now waiting for the government to announce this year’s cotton prices,” said the 61-year-old Seremani.

The Cotton Company of Zimbabwe— with an 80 percent market share— and other private companies buys the cotton from farmers for up to US$0.52 per kilogramme in the past season.

In Zimbabwe maize harvests are now meagre due to low rainfall and across the country— maize output was estimated at about 944 000 tonnes in 2019 — approximately 40 percent below the five-year average.

But Seremani has encouraged other farmers in drought prone areas to venture into the crop because cotton is a more drought tolerant crop and survives better in dry weather than maize.

In the wake of severe climate change induced droughts in Zimbabwe, experts said both cotton farming and beekeeping could reduce the severe impact of droughts to farmers.

Cotton is more tolerant to drought than maize, whilebeekeeping counters deforestation and beekeepers find worthwhile to plant trees for the bees. The trees will reduce soil erosion and siltation of rivers and dams.

However, these two seemingly positive developments have presented Zimbabwe with an agricultural dilemma. Behind the façade of a booming cotton sector in Zimbabwe, lie the devastating impacts of cotton pesticides on honeybees in the country.

“Of late I have seen bees dying in large numbers and I suspect farm pesticides are killing them,” said beekeeper Matinyadze. “But it’s difficult to protect my bees from the pesticides”.

And researches in Zimbabwe revealed that in some cases, the chemicals poison the bees without killing them but resulting in the weakening of the colonies.

In 2019, the Food and Agriculture Organization (FAO) warned that the global decline in bee populations posed a serious threat to a wide variety of plants critical to human well-being and livelihoods.

Bees and other pollinators were declining in abundance in many parts of the world largely due to intensive farming practices, mono-cropping, excessive use of agricultural chemicals and higher temperatures associated with climate change, affecting not only crop yields but also nutrition, FAO said in a statement to mark the UN World Bee Day last year. Through pollination, FAO said, bees benefit human nutrition by enabling not only the production of abundance of fruits, nuts and seeds, but also more variety and better quality.

And  a report by Bees for Development—a specialist international beekeeping organisation— said pollution of the environment by pesticides was an increasing problem in the tropics and subtropics arising from the development of large-scale cultivation of single crops.

“Use of pesticides without care for pollinating bees has brought disaster for many beekeepers. Wherever this has occurred it has also caused a poorer harvest of bee-pollinated crops,” the report said.

The report added that many farmers were using pesticides without putting into the consideration the honeybees they need to pollinate the same crops they are spraying.

“If they spray a flowering crop in daytime with dangerous types of insecticides many bees will be killed”.

And research published by IntechOpen—a global publisher of journals and books on science, technology and medicine— revealed that pesticide residues in pollen and nectar were taken by the forager bees to their colonies and remained in the beebread and honey for quite some time.

“These residues are then fed to the larvae and the queen, which are affected in similar ways as the forager bees,” the research said.

Alford Chadambuka, a 53-year-old beekeeper in Zimunya area, outside Zimbabwe’s eastern border city of Mutare said with the rising cotton farming in Zimbabwe, the future of beekeeping close to cotton farms did not look good.

“If you walk through a cotton field after spraying you will see dead bees. Some bees die in the field depending on the strength of the pesticide used. Some will die back at the hives,” Chadambuka said.

But, Chadambuka said, income from selling honey was high as crop farming was becoming untenable due to droughts.

“Though we have not talked about the issue of pesticides with cotton farmers yet, I think we need to sit down and find a solution. We need a win-win situation,” he said.

A bee expert, Anderson Chibatauta, said pesticides killed bees which were already on the flowers.

“If the pesticides are applied when the bees are not on the flowers, the smell of the chemical repels them off and they avoid the contaminated flowers,” Chibatauta said.

He quickly added that to enhance security for the bees, cotton farmers should spray their crops in the evening when bees are back at their hives.

“And before spraying there should be communication between cotton farmers and surrounding beekeepers,” said Chibatauta who is also the founder of Agri Practical Environmental Solutions, an agro company based in Zimbabwe. His company has trained hundreds of beekeepers across the country.

But cotton farmer Seremani said he did know much about the impact of cotton pesticides on bees.

“I have not looked much into that,” said Seremani. “I can change my spraying schedule. But this is new a thing to us all and we are all learning”.

The Zimbabwe government has not yet done a research on the impact farm pesticides on bees in the country.

Edgar Seenza, a senior government official in Zimbabwe’s Manicaland province said he would work with the provincial agricultural officials to find the real situation on the ground.

“I will advise on the way forward,” said Seenza who is the Manicaland provincial coordinator.

However, Chibatauta said the demand for honey in Zimbabwe was rising as many people were now realising the health benefits of honey.

“Several times I have received phone calls from buyers requesting good quality honey from producers but we can’t get it,” he said. “The demand for honey on the local market is exceeding supply”.

He said beekeeping was a good project which needed once off investment in terms of buying the hives.

However, the report by Bees for Development suggested a plethora of measures to reduce bee poisoning. These measures included the beekeeper and farmer cooperating.

“If beekeepers learn about different pesticides they can discuss with farmers warn them against the most dangerous pesticides and develop beneficial agreements concerning pollination services and the prudent use of chemicals,” the reports said.

But as bees suffer from agro chemicals, bee-expert Chibatauta reminded Zimbabweans that the benefits of bees go beyond honey.

”Beekeeping also creates employment for beekeeping trainers, the carpenters who make the beehives, the tailors who make protective clothing for beekeepers and many others,” he said.

Chibatauta, who has led beekeeping trainings for hundreds of people across the country, added that beekeeping gave farmers urgent reasons to plant trees as the success of any beekeeping project hinged on abundant trees.

He said bees gave security against woodlots as people would not just cut down trees where there are bees.