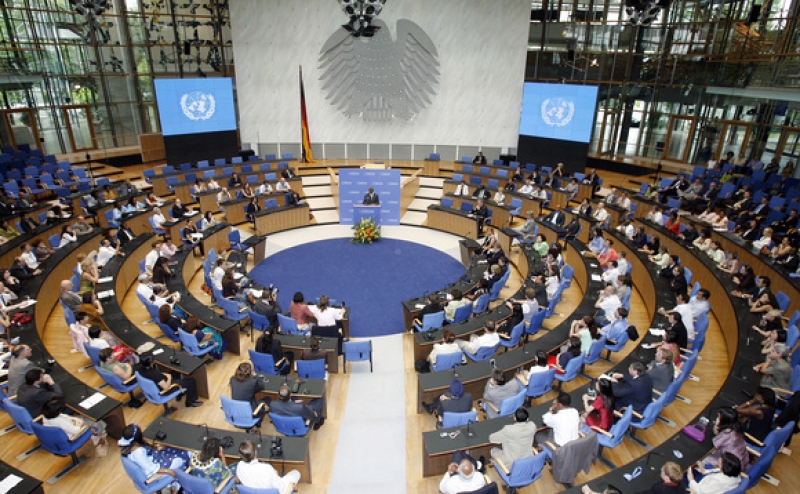 delegates at a UN climate conference

KATOWICE, Poland (PAMACC News) - Over 30,000 delegates including environmental experts, policy makers, civil society organisations, government delegations and UN representatives are meeting in Katowice, Poland for two weeks to discuss the future of planet earth, in regard to climate change – and the message is very clear.

In line with the Paris Agreement, which is an accord within the United Nations Framework Convention on Climate Change (UNFCCC), dealing with greenhouse-gas-emissions mitigation, adaptation, and finance, starting in the year 2020, the world is raring to go green.

Kenya has been part of the negotiation journey that has been calling for a green economy, and scaling down of the emission of greenhouse gases for the past 24 years, and this could be one of the reasons why President Kenyatta through his party manifesto promised to protect the environment partly using green energy.

The greenhouse gases, particularly carbon dioxide are important for keeping the planet warm upon reaction with rays from the sun. But over-emission of the gases has made the planet warmer than required, leading to over-evaporation of water from the earth surface, which leads to droughts, and when it rains, it is erratic without a particular pattern as it were before. In short, it has changed the climatic conditions

That is the reason why the world is calling on countries to reduce dependence on fossil fuels and energy from coal, which after burning releases a lot of carbon into the atmosphere. Instead, countries are encouraged to turn to renewable energy such as solar, wind, hydro and geothermal, while at the same time plant trees that will absorb some of the carbon emitted into the atmosphere.

So far, Kenya has done very well and is still on the right path in terms of investment in green energy with 84% of all electricity installations being green energy.

However, any attempt to continue with the proposed Sh200 Billion coal plant in Lamu could just negate all the good work done so far in terms of reducing greenhouse gas emissions.

Though proponents of the project say that the coal plant, which will be the first in Kenya and the largest in the region will use the latest climate friendly technology, the bottom-line remains that once coal is burned, it emits carbon, and the gas ends up in the atmosphere.

Many other countries including the developed ones have used coal and are still using coal to generate electricity. However, it is important to understand that most of those countries did not have alternatives when they started using coal, yet they needed electricity to warm their houses especially during winter, when temperatures drop sometimes to a negative figure. But with technology, most of them are shifting to renewable energy.

Kenya can therefore leapfrog this stage because there are many good options, and the international community is keen on helping the country solve its energy needs for industrial and domestic uses.

If you ask Peter Othengo, the focal point for the Green Climate Fund (GCF) in Kenya at the Treasury, he will tell you that in the past five years, the World Bank, through the Climate Investment Fund gave Kenya some Sh5 Billion to enhance the geothermal development.

As a result, Kenya is the leading country in Africa in terms of geothermal electricity generation with an output of 534 Mega Watts at the moment. By the year 2022, KenGen expects to generate at least 1,119 Megawatts of electricity from geothermal sources alone, and up to 5,000 megawatts by 2030, a half of the country’s geothermal potential.

If the coal power project goes on, it will inject at least 1,050 Megawatts into the national grid, but with dire consequences of coal pollution, of which most of the raw materials are to be imported.

Coal should therefore never be an option, especially at this time when the international community is willing to support the country to adapt to climate change through financial support and technology transfer.

In 2014 for example, Kenya was one of the seven countries that were funded for the readiness actions, to develop climate related policies. As a result, the National Climate Finance Policy was enacted by parliament on the 22 February 2018, and it is the first in the world.

Indeed, more financiers are keen to help Kenya develop using green energy infrastructure. With all the geothermal sources, mixed with hydro, wind and solar, there can be no reason why anyone should think of coal as an option.