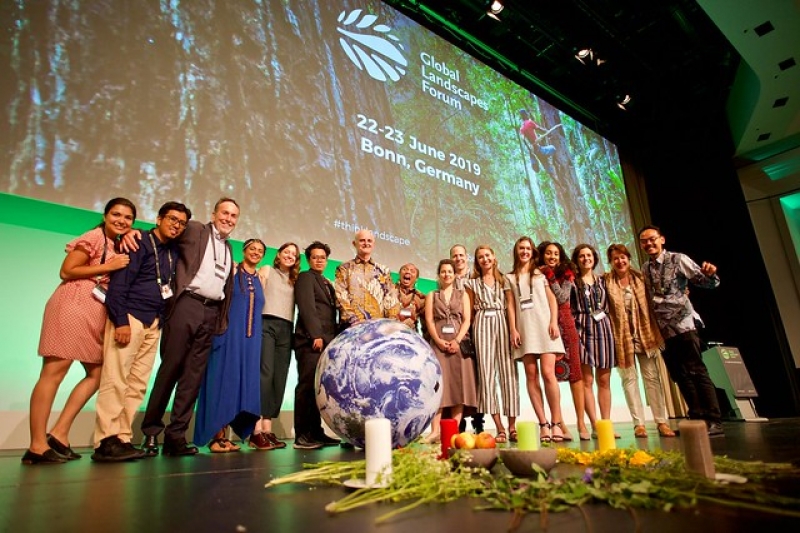 BONN, Germany (PAMACC News) - An array of experts, political leaders, NGOs and indigenous peoples and communities have agreed to a rights approach as a crucial step in confronting the global climate crisis.

It aims to strengthen respect, recognition and protection of the rights of Indigenous peoples and local communities as stewards and bearers of solutions to landscape restoration, conservation, and sustainable use; end persecution of land and environment defenders; build partnerships to enhance engagement and support for rights-based approaches to sustainable landscapes across scales and sectors; and, scale up efforts to legally recognize and secure collective land and resource rights across landscapes.

At the Global Landscapes Forum, held alongside the UNFCCC’s Bonn Climate Change Conference (SB50), the ‘gold standard’ approach was formally presented to kick-start consultations with Indigenous peoples’ organizations and NGOs from 83 countries around the globe who gathered at the summit.

The Forum, which every year carries a different theme through its series of events, news, workshops, community outreach and online courses, is focusing 2019 on rights—giving land rights the visibility they need to leapfrog to the top of global discussions, and frame rights as a solution to the climate change crisis.

The new standard, developed by the Indigenous People’s Major Group for Sustainable Development (IPMG), working with the Rights and Resources Initiative (RRI), will support the vital work Indigenous peoples and communities are already doing to adapt to global warming, threats to the world’s biodiversity and to achieve the Sustainable Development Goals (SDGs).
Presentations and expert analysis during the two day summit showcased evidence from around the globe that when the authority of local communities over their forests and lands, as well as their rights, are legally recognized, deforestation rates are often reduced.

“By implementing a gold standard, we can both uphold and protect human rights and develop conservation, restoration and sustainable development initiatives that embrace the key role Indigenous peoples and local communities are already playing to protect our planet,” said Joan Carling, co-convener of IPMG.

IPMG recognizes that Indigenous and local communities are bearers of rights and solutions to common challenges.

“This will enable the partnership that we need to pave the way for a more sustainable, equitable and just future,” added Carling.
It is expected the consultations on this ‘gold standard’ will continue until year-end.

“It’s clear that when rights of local communities and indigenous peoples are recognized, there are significant benefits for the fight against climate change and environmental degradation,” said Robert Nasi, Director General of the Center for International Forestry Research (CIFOR), which jointly coordinates GLF with UN Environment and the World Bank.

“Whoever controls the rights over these landscapes has a very important part to play in fighting climate change,” he said.

According to the United Nations, Indigenous peoples make up less than six percent of the world’s population but account for 15 percent of the poorest people. They live in some 90 countries, representing 5,000 different cultures and speak an overwhelming majority of the world’s estimated 6,700 languages.

Alain Frechette, of Rights and Resources Initiative (RRI), saidthe rights approach has been proven to be an essential condition for sustainable development projects to succeed.
“Rights – the ability of people to make basic decisions about their needs, the use of their lands, their ambitions and their hopes or aspirations – invariably determined social-ecological outcomes, including economic security, wellbeing and livelihoods.”

The basic principles of a gold standard already exist, such as free, prior and informed consent, according to Frechette. What has been lacking is the application of principles which would be boosted by high-level statements that could “spur a race to the top”.

The Forum heard that the lands of the world’s 350 million Indigenous peoples and local communities already act as powerful shields against climate change, holding 80 percent of the world’s biodiversity and sequestering nearly 300 billion metric tons of carbon. Over 80 percent of biological diversity is found on local peoples’ lands.

“Our identity is being threatened, and we need to avoid it being completely eradicated,” said Diel Mochire Mwenge of the Democratic Republic of Congo (DRC).

According to his testimony during the summit, Mwenge, who leads the Initiative Programme for the Development of the Pygme, witnessed more than a million people evicted from their traditional land to make way for a national park and given no benefits from the ecotourism industries brought in to replace them.

In the climate and development arenas, the most current alarm being sounded is for rights –securing the land rights and freedoms of Indigenous peoples, local communities and the marginalized members therein. How can these custodians ofa quarter of the world’s terrestrial surface be expected to care for their traditional lands if the lands don’t, in fact, belong to them? Or, worse, if they’re criminalized and endangered for doing so?

This year’s Global Landscapes Forum, which attracted over 600 delegates from across the globe was therefore convened to define a new ‘gold standard’ for rights, with the hope of securing the rights of these important but marginalised groups in the management of forests.