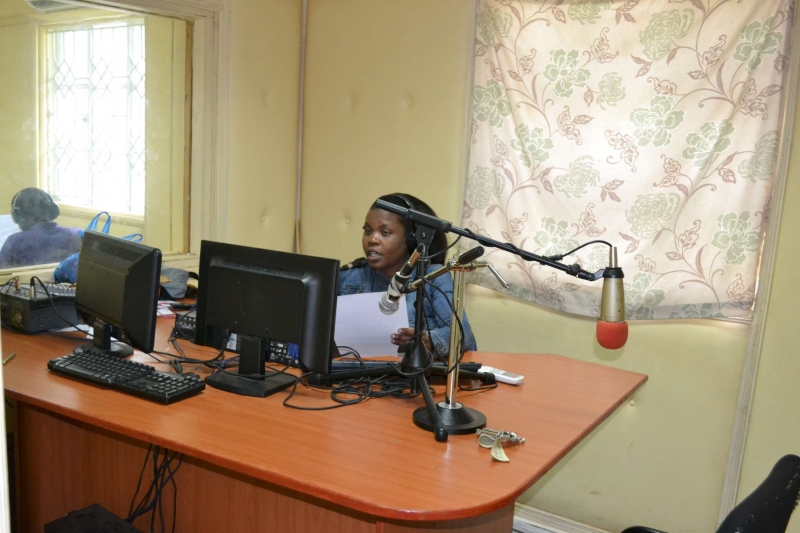 LUANDA, Kenya (PAMACC News) - At 11 O’clock in Essong’olo village in the heart of Vihiga County, 400 kilometres west of Kenya’s capital Nairobi, Philemon Echoka sits under a mango tree to listen to his favorite weekly radio programme – ‘farming in the face of climate change.’

He increases the volume of his yellow coloured solar powered FM radio as Moses Ombogo, the broadcaster at Anyole Radio introduces his guest-Japheth Manga Amutete – in a local Luhya dialect called Olunyole. And on this particular morning, the subject of discussion is ‘aquaculture as a method of adapting to climate change.’

Anyole Radio, run by the Nganyi RANET Community Radio Station in Western Kenya is one of five community radio stations established by the Kenya Meteorological Department (KMD) in different parts of the country prone to different climate stresses to help locals understand the prevailing climate and weather patterns so as to develop resilience.

The Nganyi community members are renowned rainmakers in Vihiga County. Their traditional methods of weather forecasts have since attracted the attention of international researchers, who have concluded that blending traditional weather predictions with modern science may provide a more accurate forecast. It is based on this kind of knowledge that Anyole Radio was launched on March 23, 2015 to disseminate weather and climate information across the entire Vihiga County and to parts of the neighbouring counties that include Kakamega, Busia and Kisumu counties.

But before the discussion begins on this day on Ombogo’sprogramme, the announcer takes time to read out the weather forecast for the week, revealing that despite of it being late, the long rainfall season will delay even further, and that farmers must start using climate smart techniques to adapt to the changing climatic conditions.

“That is one of the reasons why we have Amutete in the studio today, to discuss how smallholder farmers can start up fish farming projects for extra income generation,” announces Ombogo using the Olunyole dialect.

“This programme has always been a blessing to me,” said Echoka, who ownsa two-acre piece of land in Vihiga and another of the same size in Nangili in Kakamega County, still in thewestern part of the country.

Generally, the community radio station was targeted to reach out to 250,000 members of the Abanyole community, but with its infiltration to neighbouring counties, it ends up serving tens of thousands more who can understand the local dialect. The dialect can be understood by nearly all Luhya speaking individuals.

So far in his Kakamega farm, Echoka is taking advantage of the dry spell to make money as other farmers keep staring at the azure blue skies, praying for the heavens to open for the elusive rains to come down.

“From my savings, I bought a 6,000-litreportable water tank trailer, and for sure, having such equipment is the easiest way of making money at a time when everyone is complaining of the dry spell,” he said.

As people in Kakamega wait for the rains to come, others have been using Echoka’s portable water tank trailerto fetch water for irrigation especially for vegetable gardens, while others use the same to fetch water for construction among other uses, earning the farmer up to $100 (Sh10,000) per week.

This is one of the ideas that the farmer learned from Anyole radio a few years ago, during a discussion on how people can take advantage of the tough climatic conditions to generate income. “For me, the drought is a blessing in disguise. But when it starts raining, I will do what everyone does; plant crops,” said Echoka.

To others, especially the elderly people, the prevailing climatic conditions are something completely new to them. “I have never experienced what the country is going through today,” said Matthias Wanzala, 89 years from Mungakha village, Matungu in Kakamega . “Since I was a small boy, the month of April was always a month for rainfall,” he said.

On this day’s programme on Anyole Radio, Amutete is talking about fish farming, how to construct a good fish pond, the hygienic standards, how to make fish feeds from locally available resources, and how to keep predators away from the fish ponds.

But at the same time, he is faced with tough questions from listeners who are calling in, and they want to know if fish diseases exist, how to know that fish is sick, and how sick fish are treated.

On his farm in Ebulonga village in Vihiga County, the 56 year-old retired civil servant keeps 10,000 tilapia and catfishfingerlings in eight fish ponds that use water from a nearby water spring called Wamanga.

“I have already harvested five times and in the next two months, two of my ponds will be ready for harvesting,” said Amutete.

He now dreams of keeping the Nile Perch, a freshwater carnivorous fish species that grows very fast, and could be ideal for quick income generation. “I am still doing my feasibility study to see if Nile Perch can thrive on this farm,” he said.

Through trial and error and use of traditional knowledge, the retiredgovernment officer has perfected the aquaculture skill, and he has been sharing the knowledge through the community radioprogrammes.

“Whenever we are discussing such a topic, people call in and some of the callers happen to be experts in this particular field. So, I also get to learn a lot from them,” said the farmer during an interview next to his fish ponds in Ebulonga village.

At the Nganyi RANET Community Radio Station, the KMD has already built and equipped a resource centre together with a library, a climate information center, and a community computer centre, all with support from the Intergovernmental Authority on Development (IGAD), an eight-country African trade bloc.

According to Dr Byron Anangwe of the Regional Centre for Mapping of Resources for Development (RCMRD), having accurate weather forecast is extremely important, but it becomes meaningless if it is notavailed to the people who need it.

“Communities can only adapt to the prevailing climatic conditions only if they have access to real-time weather forecasting, long-term drought prediction tools, and advanced water monitoring systems among other useful hydromet services,” saidAnangwe.

According to Dr James Murombedzi, the Officer in Charge at the Africa Climate Policy Centre (ACPC) “Africa’s economies are dependent on climate change-related fields like agriculture and need relevant and timely climate information services that can be translated into decision-making tools to budget for climate disruptions,” he told PAMACC News during a Climate Information Services (CIS) workshop in Addis Ababa, Ethiopia.

Through the 2014 Africa Agriculture Status Report (AASR) the Alliance for a Green Revolution in Africa (AGRA) underscores that rapid and uncertain changes in precipitation and temperature patterns in sub-Saharan Africa threaten food production and increase the vulnerability of smallholder farmers, which can result in food price shocks and increased rural poverty.

“Many times we have incurred losses due to delayed rainfall seasons, or sometimes when the rains come too early when we are not ready for planting,” said Esther Otinga from Ebusiratsi in Vihiga.

The mother of three school going children recalls the losses she incurred when she planted based on traditional knowledge in 2011. “Since I was a child, the long rain season always begun between the 23rd and 25th of March every year, and so on 25th that year, there were all signs of rainfall, and I planted maize on the entire four acre piece of land, and another two acre piece elsewhere in anticipation that it would rain any time,” she said.

But two weeks later, there was no rainfall. She ended up losing the seed, the fertilizer, and the money she had used to pay six casual labourers who had helped her in the exercise.

Since then, she has been a keen follower of weather forecasts and advisories through local and community media so as to make informed decisions on her farm.

“I thank God that several FM stations have emerged, and through them we get to learn about the prevailing weather and climatic conditions,” said Otinga.