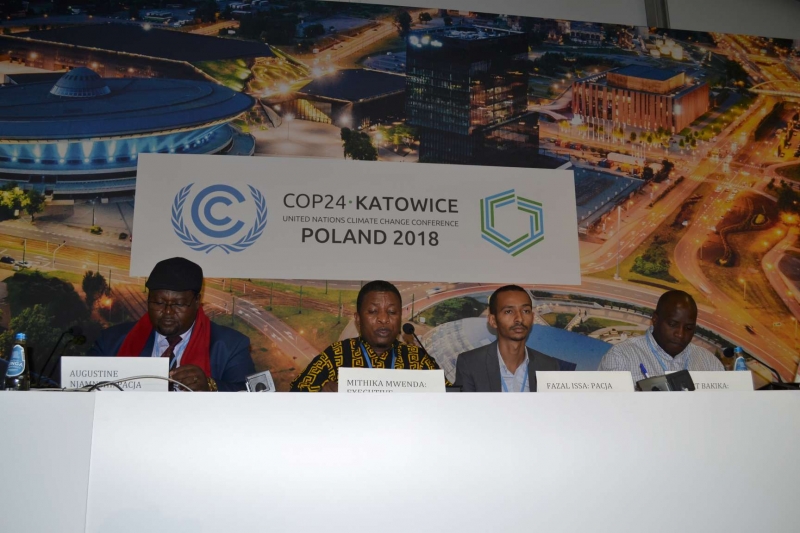 CSO members during a press conference

CATOWICE, Poland (PAMACC News) - The UN Climate Change Conference has entered into the final day of the first week termed as the technical segment. Few agenda items have been concluded and many, especially the essential ones, are not even near to be concluded in time to be taken forward to our Ministers who will be joining the conference next week for the second part of the high-level segment.

We have seen progress on Agriculture, Gender and NAPs but there are serious concerns on the climate finance, adaptation and the finalization of the robust Paris Agreement Work Programme. We have taken stock of these alarming proceedings and share the following on the elements below:

At the start of the COP24, African Civil Society demanded for fulfilment on pre-2020 climate finance commitments, putting in place robust system for reporting on the support and ensuring new, additional and predictable climate finance beyond 2025. African civil society are gravely concerned about very slow progress on the climate finance agenda items with developed countries not committing to fulfil their pre-2020 commitment and not agreeing on even initiating the process for the new quantified climate finance goal. Conclusions on how the Adaptation Fund shall serve the Paris Agreement, including ensuring adequate resource mobilization for the Fund, have not yet been agreed.

African civil society see a clear intent for the developed country Parties to shift their Convention obligation on provision of climate finance to private institutions and worse enough to developing countries. This is and will not be acceptable.

African civil society takes note of the progress on the NAPs whereby a conclusion has been reached and taken forward to SBI; but we are concerned with the overall dealings of the adaptation with no equal treatment as other elements. Adaptation has been stripped off from the transparency framework discussion and may not be part of the MRV. The elements from the transparency discussion also affect guidance to the modalities for adaptation communication.

African civil society reiterates that adaptation remains to be a priority for African countries.

The discussion on features and timeframe for the Nationally Determined Contributions (NDCs) started even before COP21 and the Paris Agreement. We are disappointed by continuous dragging of agenda which should have been concluded in this first week. African civil society supports NDCs with all elements and a five-year timeframe to be in line with the Global Stocktake.

Developed country Parties are obliged to reduce emission and support developing countries to contribute to the efforts. African civil society has observed intent to shift the obligations to developing countries avoiding differentiation and flexibility in both reduction and reporting process.

We urge the COP24 Presidency to show great determination and leadership to ensure the best outcomes of the conference. This includes a robust and balanced Paris Agreement Work Program that covers all elements and meets the required ambition; and a comprehensive framework for fulfilment and reporting of the pre-2020 commitments and ambitions. We emphasize that the legacy of the Katowice Conference lies on these issues and will be placed in history books as one of the stepping stones that paved the way for future generation. Whether positive or undesirable outcomes, it will remain in our books.