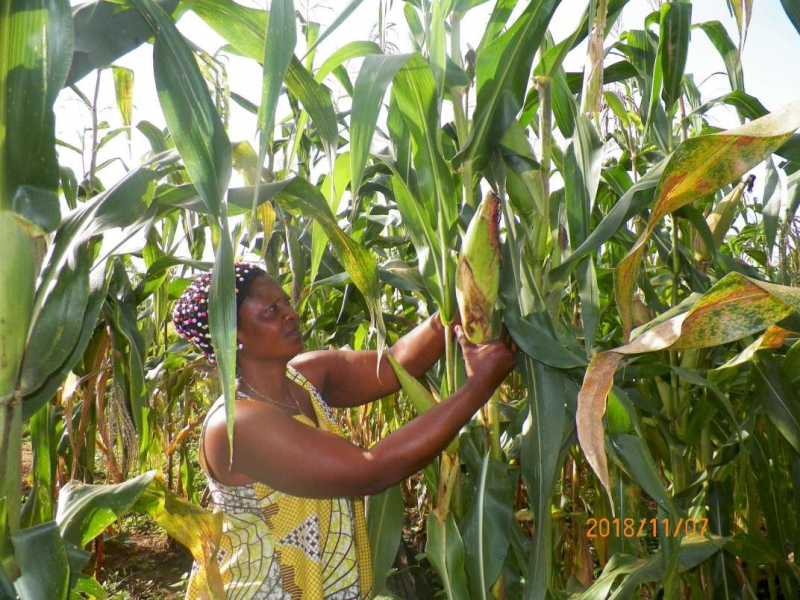 BUEA, Cameroon (PAMACC News) - A government programme to provide both private and public radio and TV media houses with up-date meteorology information is seeing a rise in awareness and change of attitude by local farmers as climate change in Cameroon becomes increasingly unpredictable.

Mary Ngule, 44  and farmer normally grows maize, beans and potatoes on her 30-hectare farm Ndop, northwest region of Cameroon. But for the past three years, worsening droughts and early rains destroyed much of her harvest.

Usually the local farmers could predict rightly the planting season with early rains and appearance of some insects experts say and their early harvest fetched them much income. But that in the past three years has disappeared as climate change brings harsher and unpredictable weather causing great loss to farmers and food supply shortages to the population.

In riposte the ministry of agriculture organized seminars and field trips to caution farmers on the dangers of planting  just after the first rain signals but this approach failed as farmers will not heed.

“We tried severally to caution farmers but the failed to heed,” said Ekungwe Christopher regional delegate for agriculture for the Southwest region.
So last year, for the first time, the government in collaboration with some telecommunications  enterprises in the country   started a meteorology information safety net programme that provides daily weather information for  broadcast to better sensitize farmers.

Over 200 community radios, 60 commercial radios and 15 television enterprises across the country now receive daily meteorological content in the form of SMS from the National Meteorological Centre for broadcast.

Farmers attest the climate information has been of great help to them.

“Last year thanks to daily information from the state television channel CRTV I waited till the rains were consistent before planting and my harvest was far better that the last two years,” said Helen Njume a maize farmer in Yaounde

Cameroon just like many African countries today suffer from the effects of climate change with many economic and social sectors increasingly vulnerable to floods, droughts, heavy winds among other calamities.

Environment experts  say the dissemination of climate information services by the media for the benefit of specific users remains essential to support Africa's response to climate change.

It is against this backdrop that the African Policy Centre (ACPC ) at UNECA has hooked up with media partner networks to assist with continental dissemination of Weather and Climate Information Services for Africa (WISER) key messages and knowledge products to help farmers and other stakeholders cope with climate change challenges.

According to Charles Muraya of UNECA,the Weather and Climate Information Services for Africa (WISER) was conceived in 2015 to stimulate the uptake of climate information by policy makers and vulnerable groups including the youth , women and especially farmers feeding the population in the continent.

« There is need for the media to play a great role in informing the population about climate change challenges, » he said at a media training workshop in Yaounde in 2018.
Accordingly, Africa’s increasingly variable weather and climate threatens development.  So too has agriculture and food security, water, energy, infrastructure, and health are already sensitive to weather related shocks.

According to Cameroon’s minister of environment  Hélé Pierre,the government created the National climate Observatory, a body that is hoped to provide unprecedented data and information for more improved climate change mitigation and adaptation action.

The country has been faced with rising temperatures and advancing desert in the north and disastrous flooding in the south, wrecking havoc on persons and property.